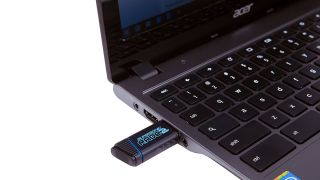 USB storage is a workhorse for anyone whose job involves computers. Pocketable and simple, there’s always a need to carry critical files around. USB storage is the ultimate in digital convenience - whether an affordable flash stick, a fast and powerful solid-state drive (SSD) or a hard disk usually no bigger than a matchbox and without the need for any kind of power supply. The floppy disk of the modern age.

For creatives, USB storage is a straightforward way to keep all-important project files backed up, carry a portfolio for demonstration or simply a tool to expand on a computer’s limited internal space for media files. With increasing resolution and file sizes of digital photography and video, that space quickly gets eaten up by 4K video and RAW images.

But the USB standard is gong through a transition. The traditional USB Type-A connector is being superseded by the smaller USB Type-C. On modern Macs, you’ll only find Type-C, and will need a dongle or alternative cable to use older USB devices.

What’s more, performance of USB storage devices can vary wildly. This really depends on the device you use. Older USB 2.0 flash sticks would chug along at under 20MB/sec which would mean a large backup of 4K videos could take hours. USB 3 sticks are much faster than others though and you can expect speeds as high as 450 MB/sec from a USB 3.1 SSD such as the Samsung T3.

Here we pick out some USB flash storage devices that offer great performance, excellent capacities, and great value for money (especially with early Black Friday deals landing all the time).

The Patriot Supersonic Rage 2 is a great little drive, the connector retracts with a push, without needing a separate cap you might lose down the back of the sofa, and it comes in massive capacities ranging from 128GB to a fairly pricey 512GB

Storage performance is everything, particularly if you suffer from slow internet speeds and can’t make use of cloud storage. Whether you’re backing up an absolute ton of files, or running large installers such as the Adobe Creative Suite off an external drive, the faster it goes, the less waiting around there is.

Thanks to some clever internal design, Patriot has managed to push USB flash storage to the performance limit here, with blistering speeds up to 300 MB/sec - outpacing most hard disks.

If you’ve bought a new MacBook or MacBook Pro in the last few years, you’ve had to give up the immediacy of your old USB flash storage, as the new Macs have said goodbye to the old USB Type-A ports, and now only have USB Type-C so you need a dongle, dock or converter cable to use them.

A handy USB-C flash drive gets around this though, plugging directly into your Mac, and one of the finest examples currently on the market is SanDisk’s Ultra USB-C Flash Drive. Not only is it a native USB-C device, freeing you from the irritating need to carry a converter for USB plugs. SanDisk has long been pushing the boundaries of USB flash drive performance with its super-fast Extreme range, and it has brought that performance over to this drive too.

Ranging from 16GB to 128GB, it manages read and write speeds of 150 MB/sec, quite an improvement from what you might expect from old fashioned USB 2.0 devices.

Your portfolio is your livelihood, so why take a risk with it? If you’re nervous about losing your precious work, the Kingston D300 IronKey is pretty much the most secure flash drive money can buy, with multiple levels of security and a rugged waterproof design.

The drive is password protected with 256-bit AES encryption, to comply with FIPS standards that most corporate environments demand, with all decrypting done in hardware on the drive itself.

Speeds vary depending on capacity - the largest 128GB drive has the fastest write speeds, with 250MB/sec read and 85 MB/sec write.

It’s also IPX8 waterproof, meaning it will survive being continuously submerged up to one metre, making it safe from drops in puddles, baths and those dreaded incidents of being left in the back pocket of a pair of jeans that are going through the washing machine.

If the worst happens and you lose your drive, with the Managed version of the D300 IronKey, you can remotely delete your files so you can be sure they won’t fall into the wrong hands.

We’re cheating a bit by including the Samsung Portable T5, as it’s not a USB flash stick at all but a full external solid-state drive, using the same fast storage technology you will find inside your computer. Because of this, it’s faster than any other kind of USB storage, making the absolute most of the high bandwidth of USB 3.1 to deliver transfer speeds up to 550 MB/sec.

As such, it’s also considerably more expensive than a standard flash stick, with some eye-watering high prices for the 512GB version. You definitely don’t need that kind of speed purely for file backup or to carry a few JPEG images around, but instead, it’s so fast you can edit and work with large files directly on the T5 itself.

In fact, there are all kinds of alternative uses for a drive this fast. It works great as an external boot drive, so you can run an entire operating system from it at full performance, which is handy for Mac users who need to work in Windows too.

A USB hard disk is the best value for money

Hard disk technology may be decades old, and not quite as fast as some USB flash storage, but the WD MyPassport offers the absolute best value for money in terms of how much capacity you get for your money. If you have a monstrous file collection - perhaps working with a large media library of 4K video files taking up multiple TB of space, then it would be wrong for us to not recommend using an external hard disk, rather than a USB flash drive.

The larger 3.5-inch models offer the largest capacities, but these all require a bulky external power supply, making them a lot less portable and negating one of the main points of external storage. A 2.5-inch drive is powered entirely by USB though, so you can still easily carry it and with 4TB on offer in the WD MyPassport line, you can fit a really massive archive of files in your pocket.

Expect transfer speeds around the 100MB/sec mark over USB 3.0, so it will take a few hours to fill to full capacity. It’s very quiet compared with standard hard drives - we barely noticed it was there, lightweight and comes in some pretty bright colours.

If you’re looking for an inexpensive simple option for a massive file back up over USB rather than the fastest performance, this is the drive to go for.

USB flash storage can come in all shapes and sizes, and you even find USB storage fashioned into all kinds of objects, often given away as promotional items. How about one that’s so small you can leave it plugged in to your laptop and barely notice it’s there?

That’s a good description for the SanDisk Ultra Fit USB 3.1 Flash Drive, which is about the size of a thumbnail and almost disappears when plugged in, save for a small lip that helps you remove it easily. But thanks to SanDisk’s fast flash storage, it can still handle a nifty 130MB/sec read and write. Not bad at all for a little guy.

Great for large amounts of data in harsh environments

Another hard disk option here, and this time the unique feature is that the LaCie Rugged USB-C's orange rubber casing makes it extremely durable. While flash drives don’t have any moving parts, and can survive even severe drops, a hard disk (when powered on) is far more fragile. Drop your laptop while files are copying to a hard disk and there is a real risk the disk could be destroyed and your data lost.

Lacie’s rugged design apparently can withstand a 1-ton car, is resistant to rain (other versions are fully water and dust resistant) and can handle a drop of up to 1.2 meters.

That makes it a great choice for content creation on the move. If you’re capturing images and video in harsh environments, and need more capacity than a standard USB flash stick, this is a great choice.

One nice additional touch is that Lacie has thoughtfully included both USB Gen 1 and Gen 2 cables in the box, so you won’t need any adapter or dongles, whatever ports are on your computer.