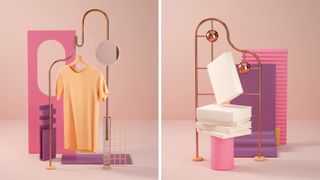 There are many ways to use your design and illustration skills to generate extra income, over and above picking up freelance work. For many creatives, profit isn’t top of the agenda when planning a side project. It’s a bonus, rather than the main goal. However, even if side projects don’t bring in extra income immediately, the boost to your graphic design portfolio can lead to work indirectly – or make money in unexpected ways further down the line. Here, we explore four ways designers have branched out and turned a sideline project into a big earner.

Diana Hlevnjak was working for a small web design firm when personal circumstances led her to relocate to another city. She managed to work remotely for a while, but times were tough and her contract was terminated shortly before the company shut down.

Hlevnjak had been selling digital assets through stock libraries for some additional income, but there wasn’t enough to cover her costs. She focused all her efforts on the task to see how lucrative it could be. “I liked the fact I didn’t have to deal with sales, clients, meetings and similar tasks that introverts don’t like,” she confesses. “It also meant I could work from anywhere.”

When she first started out, the returns were low, but gained momentum as she kept putting up more and more products on more and more platforms. Hlevnjak’s focus was on graphic resources such as patterns and textures, an area she’s passionate about. This is crucial, she argues, to stay motivated when building up a large portfolio of assets.

She watches trends across illustration and design, as well as fashion, interiors and architecture. “Last summer was big on monstera and cacti plants, which came from Scandinavian interior design,” she says. Although her work is still sold on Shutterstock and iStock, Hlevnjak points out that the volume of assets on the large libraries means things that are on-trend one month are soon buried beneath new trends.

She has instead been focusing her efforts on more niche marketplaces such as Creative Market, where watercolour illustrations and textures tend to fare well, as well as her own website: Polar Vectors. The strategy has paid off: Hlevnjak has successfully managed to turn an occasional sideline into her primary earner. “As a freelancer, I am accepting less and less client work, and it’s become a minority of my revenue,” she reveals.

Following her success on the conference circuit and growing love of public speaking, Jessica Hische decided to turn her hand to teaching – and her hectic schedule meant an online course was the best option.

“I haven’t been in a position to commit to teaching at a university – I’m hardly ever in one place for 15 weeks straight,” she explains. “Skillshare was a good in-between of an on-stage talk and a more intimate classroom. You can pour more into an online course than you can a one-hour talk, but it does scale, unlike in-person teaching.”

Hische’s first course was based on her Penguin Drop Caps book project, which was itself inspired by one of her best-known side projects: Daily Drop Cap. Although Hische was responsible for putting together the course content, Skillshare took care of all the “production heavy lifting”, including filming and editing. Her second course took a more general angle, focusing on the logo development, feedback and the revision process.

“It’s been a very good source of income over the years, especially when it first launched and they had a different model for paying teachers,” she reveals. “Initially they sold tickets to each course and teachers made 75–85 per cent of the ticket cost, but a couple of years in they switched to a membership model that does revenue sharing based on class popularity,” Hische continues.

“But not every teacher earns a lot from online teaching platforms,” she warns. “You do really need an audience that’s already interested in your work to take that leap to starting a class.” Take a look at Hische’s Skillshare courses here.

A common thread evident with many of the creatives featured here is public speaking – not just as an income stream in and of itself, but also as a springboard to other opportunities. Jessica Hische, Jon Burgerman and Gavin Strange have all clocked up their fair share of design talks around the world.

“I was first asked to speak about my work because of Daily Drop Cap,” recalls Hische, revealing yet another major opportunity spun off from that one killer side project. “After gaining a bit of experience, the demand snowballed. I was very nervous at first, but with a little practice it has come more naturally to me. I became a good speaker, and conferences are always on the hunt for strong female voices in their lineup,” she points out.

“I try not to do speaking jobs unless I’m paid, or it’s for a good cause,” reveals Burgerman. “It’s work, so I need to be paid! Otherwise there are books and movies I’d rather be catching up on.”

While talks at schools, colleges and non-profits are rarely paid, full-blown conferences tend to offer a fee, plus travel and accommodation. “Fees range between $1,500–10,000, with almost all events that I enjoy talking at falling on the lower end of that range,” explains Hische. “The more you’re paid, the more likely it’ll be a very business-like conference, rather than a looser creative event.”

She has several ways of figuring out the right speaking fee, including taking into account how much prep time is involved and how long she’ll need to be out of the office.

Like Hische, Strange insists on transport and accommodation to be paid as a minimum, and always asks for a speaker’s fee for more commercial-focused talks for businesses.  “Depending on the size of the festival, some pay and some don’t,” adds Strange. “Over the years I’ve become comfortable having that conversation. They’re nice bonuses to have, but I didn’t get into speaking for money,” he concludes. “It’s the joy and excitement of having the privilege to do so.”

After almost eight years of writing talks – a totally new one each year – Gavin Strange  ended up with a vast bank of written notes. After speaking at The Do Lectures he was handed a book by David Hyatt, co-founder of Do. “I loved it because it was so inspiring, but it was also formatted a lot like how I structure my talks,” he recalls. “For the first time ever I thought, maybe I can write a book?”

He got in touch, and the rest was history. Working closely with Miranda West, editor and founder of the Do Book Company, his book – Do Fly – took shape. Although profit is never high on the agenda for Strange’s side projects, Do Fly provides him with some royalties every quarter, and has recently been licensed to indie publisher Chronicle Books to distribute in the United States. Appetite duly whetted, Strange is already thinking about his next book – and how it could be timed to coincide with turning 40 in a few years’ time.

Over the years, Nottingham-born, NYC-based doodle master Jon Burgerman has dabbled in a dizzying array of self-branded merchandise, from toys, prints, books and T-shirts to mugs, laptop sleeves and wallpaper.

Of course, he had to start somewhere and learnt a few lessons the hard way: “Always make things in small batches first, and see how your market reacts,” speaks the wisdom of experience. “Don’t make a thousand T-shirts. Make 10. I think there’s a basement in Nottingham that still has a few boxes of my unsold T-shirts in it,” he winces.

“Hand-make stuff to keep the manufacturing costs down for low runs,” he continues. “There are lots of print on-demand sites, so make some test pieces, show them to people, and see if anyone will buy them. Go from there. Dead stock can be costly!”

“It’s not fun spending all day and night packing up little toys into custom-made boxes, then waiting in a huge Post Office queue to send them out,” he adds. “Then there’s things like dealing with missing packages, and grumpy customers who want everything delivered the minute they place their order.”

Ultimately, it all paid off for Burgerman – but his experiences are a cautionary tale for anyone keen to sell their own products online. Thinking of creating your own products? Take a look at our guides to how to succeed as a designer-maker and our business tips for selling design goods for more advice.