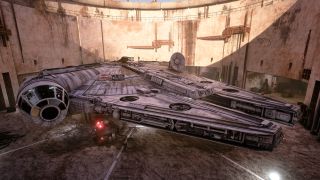 Jason Lewis, senior environment artist at Obsidian Entertainment had wanted to model the Millennium Falcon in order to explore it in Unreal Engine 4: “The whole project started with just building the Falcon as a real-time model, and then needing an environment to show it off in, then the project just grew from there,” he explains.

“The goal for the Falcon was to create one of the highest detail real-time models ever,” he continues. “So going with that mentality I decided that high-end PC hardware would be needed to run it at smooth frame rates, and surprisingly what we produced actually runs pretty well on even mid-range hardware.”

The finished model took Lewis eight months of working in his free time to complete; and he estimates he spent 350 hours developing this one asset.

In the following steps, he outlines his process for creating the famous Falcon…

The first step in creating the Falcon model was to gather as much good reference imagery as possible. I collected photos from the internet, as well as lots of screengrabs from the original movies. The basic forms and proportions were created using orthographic drawings from model kits (primarily the 1:72 scale Falcon kit from the Japanese company Fine Molds as it has the reputation for being one of the most screen-accurate model kits available).

Modelling was pretty straightforward. Most of it was just following the reference imagery. The thing about the Millennium Falcon is that the entire ship is made up of relatively simple shapes, so it isn’t really difficult to model. It's more a test of sheer will, as it uses a significant amount of simple shapes to give the illusion of complexity. I made the decision early on that most of the details in the ship would be modelled as opposed to normal map details.

Once modelling was finished, the asset was imported into Unreal 4 to test scale, collision, basic lighting, and proportions to make sure that everything looked correct from a human-scale, first-person perspective.

The Falcon was the first asset brought into UE4, then from there I built out docking bay 94 and its interior, and then we started to add the city around it. It was here that I decided to expand the project far beyond its original scope and recruit more people to help finish it.

The original Docking Bay 94 interior was small and simple: a single hallway and staircase leading from the entrance of the bay, down to where the Falcon sits, but then I realised two things: once you got down to the Falcon there was no way to see the detail on top of the ship. I added a second hallway that led to an upper-level control room and had an upper-level ring around the entire circumference of the bay.

Also, since we didn’t make any LODs for our models, in order to keep frame rate up, we relied on lots of streaming of sections of the map in and out of visibility and memory. Since the Falcon was such a large system-intensive asset, we needed more time from when you enter the bay to stream the ship into memory, so I made the bay larger with some air-lock rooms to allow time for streaming.

The problem was that since it was such a large asset, a normal diffuse/normal/spec texturing approach wouldn’t work as texture resolutions would have to be very high to keep the texel density from turning to mush when the player got close to it.

At that point I had heard a little about Unreal Engine 4’s layered material system, so I did more research into the system and decided that it offered exactly what I needed for the Falcon, good distant fidelity combined with good texel density up close.

For the Falcon I had four base surfaces, base painted grey metal/distressed painted grey metal/bare metal/and stained, scorched metal. Those are then set up as material functions instead of standard materials, then for each piece of the Falcon, I gave it a unique material into which I inserted the base material functions and used greyscale masks that match each piece’s 0-1 UV layout to blend between the different surface types.

So, all in all, I was able to get good up-close texel density from the tiling base materials without it looking like tiled textures due to the high fidelity of the 4k mask textures.

Once the texturing and material setup was finished, the final model was imported into UE4 and placed in Docking Bay 94. The final step was to light the Docking Bay interior and the Falcon. At this point our lighting artist had done a base pass on the overall lighting scheme for the entire level and all I had to do was the detail lighting in the bay itself. This included landing lights around the ship, down lighting from the lower saucer section, emitted light from the engines, several self-lit areas in the recessed parts of the ship and all the little navigational lights on the ship itself.

Lighting was a pretty even split of placed lights in UE4 and emissive materials on the Falcon model. Most of the placed lights were static lights. I only used stationary lights where I really needed them, in places where I wanted the specular highlights and sharper real-time shadows. Emissive materials actually do a really good job of emitting baked lighting in a scene.

A bit of polish and clean-up of lightmap UVs on a few parts of the ship was next: animating the glow on the ship’s engines (this was done with some sine and cosine nodes multiplied against each other and plugged into a multiplier that went into the emissive slot in the material), adding the steam particles to the ship, and adding a very simple cockpit to the interior to be seen from a distance only.

This article was originally published in 3D World magazine issue 216. Buy it here.