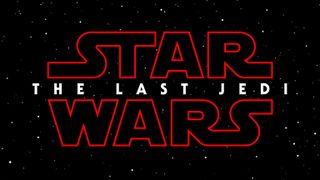 Deep breaths everyone, deep breaths. Disney has just revealed the title of this year's Star Wars film and teased us with a different coloured version of the space saga's famous logo design.

The eighth film in the Star Wars franchise will be called The Last Jedi and if the logo above is anything to go by, it looks set to shake things up. Whereas all the other films have been adorned by the yellow Star Wars logo, The Last Jedi has instead opted for a red version. Cue a meltdown on social media – here is just a tiny selection of tweets:

#EpisodeVIII is to be called "The Last Jedi," but that's not nearly as interesting as the fact that the #StarWars logo is now red.January 23, 2017

the last jedi is a great title and the red logo choice is surprisingly coolJanuary 23, 2017

THE LAST JEDI is such a tantalizing title. Presumably about Luke, the red Star Wars logo implies dark and desparate times aheadJanuary 23, 2017

People think the new star wars is a good thing but the title red and the last time that happened a room full of kids died #TheLastJediJanuary 24, 2017

I love the red in the #TheLastJedi logo, but I'm not crazy about the font and title placement pic.twitter.com/TtdKu3WpX8January 24, 2017

People are reading too deep into the red #StarWars #TheLastJedi title. The Return of the Jedi title was red and it didn't mean anythingJanuary 24, 2017

This is a prime example of how colour theory gets people thinking about design. Fans are currently debating whether this means the film will take a darker turn, and all Disney had to do is paint bucket a different colour onto an existing logo. Its resemblance to the Stranger Things logo probably didn't do it any harm either.

Unsurprisingly, the title has also drawn a lot of attention from fans. Who is the last Jedi? Does it refer to a single Jedi or a group of them? Perhaps one person who could hazard a guess is the Deviantart user who predicted the title of episode VIII back in 2015.

That's right, MrStieners guessed the title two years in advance, and even mocked up a version of the logo (below). Sure, the font isn't red, but if MrStieners was that good at predicting the future we'd all be asking him for next week's lottery numbers.

We'll have to wait until the film is released on 15 December to see if the red logo will make it to screen, and learn who exactly is the last Jedi.