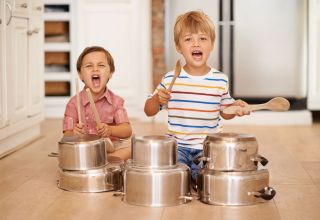 Here's a riddle: I take up your spare time and keep you up late. I don't thank you yet I'm extremely rewarding. What am I? Well, there are two answers here: your job or your kids. But rarely both.

I've always found it interesting how few of my close friends in the creative industries have children – or at the very least, have put procreation off until much later in life.

After some soul searching prior to the arrival of my first daughter in 2013, I decided the main problem is that creative people already feel they have a proxy child in the form of their work. It bleeds out into our personal lives, we're emotionally invested, and the worry is that a mewling, needful child will take up too much time for us to focus on the important stuff – usually more work.

I was two years into running my studio when Holly arrived and, despite my initial misgivings, what happened next took me by surprise: I went on to have the most productive year of my career.

I didn't grow up with a dad around so had very few expectations of myself as a father, but it turned out I loved it. In fact I was besotted. And immediately after she arrived, everything else – to paraphrase Fight Club – got the volume turned down. Every cover or commission I had completed suddenly felt much less important. I was still proud of my work, but the endorphins kicked in and I was at the mercy of my hormones as much as the next gushing father.

When our second arrived in late 2016, I was in a different place entirely, creatively speaking. After five years of flying solo, I missed the support system an agency provided, and that spring I had accepted a senior vice president role at a mid-sized agency. Overall I was feeling optimistic that I would be able to balance life as a father with the demands of New York agency life.

My goodness. It was a change. The money was lovely. Having a support system and art buyers and account handlers and producers (producers!) was absolutely glorious. Initially, I felt really good about my decision to go back into agency land.

But sure enough, the pitches went as they usually do: a late night here, a weekend there, a holiday got cancelled, the hours became longer, and the agency’s creative ambitions no longer matched my own.

After a year, I was not only disenfranchised, but I was missing my family. Many evenings would go by when the kids were already in bed when I got home and I’d see them only for a snatched hour in the mornings.

So last week, just before my second daughter's first birthday, I decided it wasn't worth it and resigned from my role. This is truly disastrous timing. We've just bought and renovated a house, and now I'm exposing myself to the costs and insecurities of running my own business again. In the US, this also means finding thousands of dollars for healthcare and once again, all I can see is financial outlay.

But you know what? It's 3:15pm, I am once again master of my own destiny, and I'm about to head out and pick up my daughter from preschool. And I cannot wait..