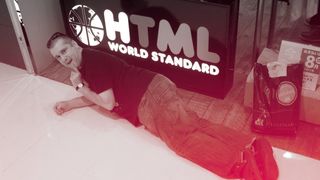 Bruce Lawson will be speaking at Generate London, 21-23 September, where he'll discuss the challenges to web access in Asia and Africa that we need to understand if we want to think beyond the Wealthy Westerners' Web and reach the next four billion people with fast, performant sites.

Also, Google's Paul Lewis will be discussing progressive web apps and explaining how they can truly enhance your next web project. Book now to ensure you don't miss out!

For a taste of Bruce's talk, here he is talking to net magazine on the subject of progressive web apps, and the impact they're going to have, particularly in the developing world.

BL: Totes – they're more nourishing than sugar, and sweeter than honey.

net: Seriously though, what problems are you hoping will be solved by this movement?

BL: The problem is the UX gap between native apps and the web, now we pretty much have API parity. Native apps can be 'installed' to the homescreen and tickled into fullscreen glory with your finger. PWAs add this UX feature (because UX is a feature) so you can save a web app to your homescreen, just like native. And with Service Worker, it can run offline.

But, better than native apps: it never needs updating! The app lives on your web server. If you're old as me, you might even call it a website, progressively enhanced into an app.

net: What new challenges are developers likely to face when coding such apps?

BL: Making an app manifest is easy. In fact, I made a generator to help you. The biggest challenge is getting to grips with Service Worker, which is very powerful and therefore can contain many moving parts.

net: What impact will progressive web apps have on the developing world?

BL: We're seeing the first progressive web apps coming out of India and Indonesia. That's because there's very little to install on lower-specced devices (measured in KB, not MB). Flipkart in India made one because it wants to reach every phone, on the flakiest networks: the UX of apps, the reach of the web.