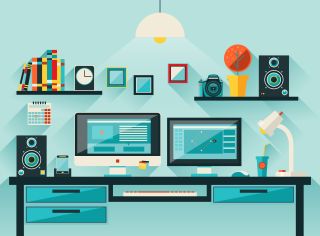 Some of my mates doing a graphic design degree left me biting my nails to the quick when they announced proudly that the companies that had taken them on during their placements had offered them full-time roles with a starting salary of £25k. It made me take a stern look at my own degree, in illustration, and face the harsh truth that a full-time employment role in my field is extremely rare.

That was 2006. The world is now at the mercy of a fully grown digital revolution that was then still peering over the play gate. Chances are, if you’ve just graduated, you’ve seamlessly grown into that digital landscape and are now standing at the freelance/employment fork in the road, hair still plastered to your head from the mortarboard that helped put real life off, just a little longer, for the camera. Both routes are fraught with many pros and cons, but thanks to the warp-speed technological advances of the last decade, roles are not as easily defined as the courses you chose from the university prospectus.

One thing’s for sure. Nobody will come and find you, and tell you what to do. You’re entering an overcrowded industry that’s more cut-throat than Game Of Thrones. This isn’t supposed to intimidate you – it’s just a fact, and it’s always been that way. It’s just that now it costs less to set up a business thanks to the many tools we have at our fingertips, so it’s a heavily crowded market. But technology isn’t all about the digital. It’s humanising many things – a backlash of sorts, from the overexposure – and placing a renewed emphasis on values that transcend technology.

Get the basics right

You may well be the best in the world, but write an email riddled with bad grammar and an impersonal tone (I’ve received emails asking for my time without a ‘hello’ or my name) and you’re axing your chances of a job interview, or even a response from the people who can give you the platform to prove it. Follow trends and you’re gone, creativity and identity lost in the deepest shadows of online fan art. Be respectful to all and everyone, but show passion and express your own ideas. Arrogance creates nothing but distance, while personal recommendations open secret doors.

If these things sound basic, it’s because they are. Creative superpowers are deceptively simple and so often overlooked with terminal consequences.

The creative industry, like any other business, is built on the right balance of relationship building, individuality, forward thinking, resourcefulness, patience and hard work. Neither the bipolar nature of freelancing nor the payday security of employment hold any guarantee of everlasting creativity or mortgage-busting riches. The right path can only be chosen according to what works for the individual. Even then, it will often change in time. But you can give yourself the best chance of the right start by building on the simplest of timeless foundations.