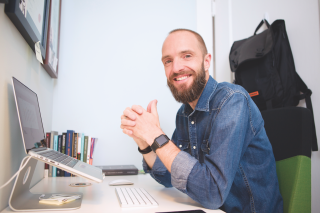 Josh Brewer will give a talk at Generate San Francisco on 9 June, alongside speakers from Twitter, Netflix, Uber and NASA. There's also a Generate conference on the east coast on 27 and 28 April. Get your tickets today!

With hindsight, our timing in speaking to Josh Brewer could have been slightly better. A veteran of Socialcast and Twitter, his current project sounds fascinating. Abstract promises to be the home of unified design, helping to document and connect design projects ... but Brewer can’t really talk about it yet.

“We’re still very much in stealth,” he says. “Some of that may change in the next month or two, but as it stands it’s still pretty quiet.”  While he can’t go into specifics, he’s happy to drop some tantalising hints about the thinking behind the app: “Abstract really was born out of the conversation myself and my two co-founders, Kevin Smith and Frank Chimero, were having around the state of design tools,” he tells us.

Together they realised that their engineering counterparts have a really advanced tool chain, including tools for tools and a modular workflow that allows for plenty of collaboration.  “All of the benefits that come out of a workflow that’s oriented in that way – the communication, the collaboration, the system of records produced around decisions that were made – all those things are missing from the design side of the house,” he explains. “So we set about to do something, I think, a little audacious.”

Crucially, the team at Abstract aren’t betting the farm on a new set of tools; rather they seem to be working hard on an irresistible alternative to the familiar – but often frustrating – mix of Slack, Dropbox and Google Docs that’s become the de facto getting-things-done solution in any creative environment.

“We’re really trying to become the glue that brings together the modern design workflow,” he says.  A big part of the process for the Abstract team has been stepping back from their ideas of what they want to achieve, and listening to what other designers need. “We’ve been a research-oriented company from the start,” notes Brewer. “We know we have a perspective and opinion based on our experience, but we also know that every designer has a slightly different workflow and a slightly different experience, and we really wanted to make sure we were doing our best to understand the true pains that are happening right now for designers everywhere.”

Brewer’s route to Abstract has been long and circuitous, with many interesting stops along the way. He grew up in Seattle before moving south to San Diego, and he remembers his youth as consisting largely of skateboarding, music, and trying not to get in too much trouble.  “I played a ton of music,” he recalls. “I was in bands, and honestly a lot of the initial stuff that got me interested in design in general stemmed from my skateboarding days, doing zines, and once I was doing music and whatnot, posters and flyers for shows and all that jazz.”

A career in design clearly beckoned; instead Brewer got into teaching. “I ended up at a private elementary school, teaching computers to the kids there,” he tells us. Around the same time he started dabbling in building websites, and found that not only was he teaching the kids to use computers, he was also teaching the teachers how to use this technology with their kids.

“It took me years and years to finally identify that a lot of my passion around creating better experiences – especially on the digital side of things – stemmed from working with both kids and older adults, trying to figure out how to use computers, and knowing that technology was going to become more and more central to our lives. How do we design better software? How do we build better experiences for anyone to be able to engage with?”

This preoccupation with the big questions of design remains with him to this day. He’s delighted how the value that design can bring to a business is increasingly being recognised, and he’s a firm believer in design having a voice equal to that of engineering, product and the business itself.

“I think just acknowledging there’s a unique perspective and a unique value that design brings to the table is the one thing I’ve really pushed for and championed in a lot of the work I’ve done,” he says. He brings this passion for design to his work  with the Designer Fund – a community of artists that invests in design-led startups (including Abstract) – where he’s part of the Designer Fund Guild and also works as a mentor.

After a while, it became clear to Brewer that what he really wanted to do was not to teach, but to build these products and experiences. Fortunately for him, San Diego in the late 1990s and early 2000s was a really good place for someone to cut their digital teeth, with its own web scene and startup culture enabling Brewer to build his digital skills and learn his trade. Eventually this led him, in 2008, to Socialcast: a collaborative team communication tool that makes you wonder where Slack got its big idea from.

The comparison’s not lost on Brewer. “I’ve had a few conversations with Stewart [Butterfield, Slack co-founder] in the past, before they actually launched Slack, and I was really excited about what they were building at the time,” he reveals. “It felt like an evolution and very much in the same spirit of what we were trying to accomplish with Socialcast, which was really to bring a more real-time, open communication channel to the workplace.”

The fundamental driving force behind Socialcast was a belief in getting people to share rather than hoard information, and to break the notion that power is derived from how much information employees hold for themselves. It aimed to, as Brewer explains, “flip that on its head and have it be much more about: How much can I contribute, how much can I share, what I’ve learned? How can I make that available to the rest of the company? And I think we did a pretty good job.”

By the time VMware acquired Socialcast in 2011, Brewer had already moved on to Twitter. Between 2010 and 2013 he was principal designer there, and looking at the Twitter website today you can still see Brewer’s hand in the design. “We did a lot of things to evolve and refine the design of the core systems, and there have been a lot of different initiatives throughout the years to add on to it, to take the content and present it in different ways,” he notes. “But by and large it’s a fair assessment to say that the design of the core product is pretty stable and has been stable for years.”

While at Twitter, Brewer worked on a project to enable people to catch up and reorient themselves when they come back to the site. “Part of it was attempting to solve a churn problem,” he recalls. “People come back and they just really don’t know where to begin to engage. They would just drop off and we’d lose them. The other part was that Twitter can be such a fast-moving stream that if you want to return to certain people or certain topics, it’s very difficult.”

He takes some satisfaction in the fact that Twitter is finally on the case with this, in the form of ‘Moments’ and ‘While you were away’. “It’s nice to see some of it trickle its way out,” he muses. “It’s a little sad that it’s taken this many years, but, you know, that is what it is.”

Brewer’s still a big fan of Twitter. “I’m a huge supporter,” he says, “I think that some of the most unique and interesting moments happen on Twitter.” But if you check his own feed you’ll find that these days his approach to it is more restrained.

“Living in Twitter day-in and day-out, having it open on my desktop, having it be the first thing I checked every time I pulled my phone out of my pocket, was a habit that I really grew uncomfortable with,” he reveals.

“I don’t feel like you can have the most productive conversations on Twitter; they tend to be very blunt and abrupt, and I found that I didn’t need as much of that in my daily life. So I’m definitely not as active as I once was, but I still do enjoy getting on there and seeing what people are talking about, responding to friends here and there.”

As well as stepping back from the constant flow of Twitter, Brewer has become a big believer in putting his devices down, disconnecting and being present in the moment. He’ll avoid looking at his phone for at least an hour when he gets up in the morning, and he makes a point of setting aside time to be with his family, without the distractions of the digital world. “As a family we definitely try and get up in the mountains often, and really try and disconnect from devices and get out in nature, ” he says. “It has fundamentally changed my perspective on life, and it’s definitely given me a lot of balance back that I didn’t realise I was losing.”

And while he still has time for the music – he’s just recorded some live  guitar parts for a friend’s electronic music project, but mostly plays acoustic guitar for his wife and kids – sadly the skateboard no longer gets the attention it did in his youth.  “I broke my finger a couple of years ago and I basically couldn’t work for a little while,” he explains. With his work these days mostly involving typing, he’s come to the conclusion that risking injury on his deck isn’t an option any more. “I’ll still kind of push it around, but I’m not doing too many tricks these days,” he smiles.