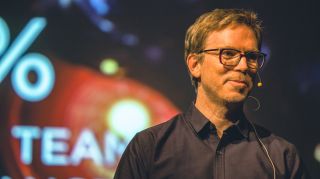 Dr. Sébastien Deguy will be doing a keynote talk at Vertex, our event for the CG community. Get tickets now!

We all know the name of Substance by now, right? This suite of texturing tools has reinvigorated the games industry and is used by the biggest game studios, but that doesn’t stop indies from giving Allegorithmic’s software a try. Allegorithmic’s MAT Contest, which was launched for the first time in 2017, was a first for the company, and a huge success to boot, too.

“We received 1,200 entries which might be one of the biggest contests in the digital art world and in the 3D media and entertainment world,” says its CEO, Dr. Sébastien Deguy. There was a real diversity in entries, from seasoned game artists to students and new texture painters. “The winner used Substance Painter for the first time, and it shows that it’s a tool that’s easy to pick up!”

One version for all

Key to Deguy’s core business principles at Allegorithmic has been the idea of fairness that stems from his father, who owned his own plumbing business. “I look back at it and I think it’s one of the most important things when you want to do business in a proper way. When you’re fair, people get back to you again and work again with you. My favourite expression is that ‘life is not a zero-sum game’.”

It’s not a surprise, then, that generosity is also a core value for Deguy, as he admits that in the past Allegorithmic may have given ‘too much’ – making some of the product releases unfair on the development process.

One of the reasons that Substance Painter and Substance Designer became numberless in Summer 2017 cycles back to this idea. “It’s an unnatural and fake structure – the big releases. It’s like, should we withhold and wait for this feature to go in a big version? We wanted something that is fair and modular to our users and that is fair and manageable to us too.”

In five years time, however, Substance may change completely. “We’re having fun,” says Deguy. “Growing this fast is challenging. But what we really like is making products. I’d like to see a more complete portfolio, to do asset creation, what we can do for the left side of the pipeline, like parametrisation, and more hybrid ways of producing content – mixing textures, surfaces and meshes maybe, but also rendering and visualisation, we’d like to improve on that, too. And being more present in films and architectural work – seeing Substance in as many places as possible!”

Don’t miss out on Sebastien's talk at Vertex! Book your ticket now at vertexconf.com. There are still some amazing workshops we’ve yet to announce so keep an eye on our website, where you can also find out more about the other amazing speakers, workshops, recruitment fair, networking event, expo and more.

This interview has been edited from its original version in issue 110 of 3D Artist, the magazine offering practical inspiration for 3D enthusiasts and professionals. Subscribe to 3D Artist here.