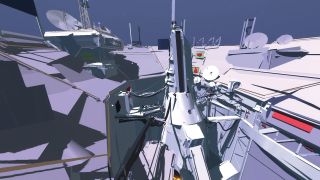 Every now and again, something comes along that shakes the creative industries wildly, causing art directors to spin with excitement and changing everything, forever. The first computers did it. Photoshop did it. Does Google’s new virtual reality Tilt Brush mark the cusp of another seismic change for artists?

According to Darren Bacon, yes. The lead concept artist at 343 Industries – a division of Microsoft developing the Halo franchise – predicts limitless possibilities for VR as a production art tool. “One of the first reactions I had to trying the technology was that VR and Tilt Brush – being first to market – are likely to be in every corner of the design/art industries soon,” he says.

“I was skeptical, but after donning the headset and making a few strokes in Tilt Brush, it all made perfect sense,” Darren continues. “I believe we’re in the middle of a revolution similar to when the industry made the switch from traditional art techniques to Photoshop 20 years ago.”

His colleague, art director Nicolas Bouvier – aka Sparth – agrees: “I think we suddenly jumped forward in time,” he says. “The possibilities are endless when it comes to implementing new features that could benefit both art novices and pros.”

Tilt Brush enables anybody to create in a 3D space with just the wave of a hand. You can step in, around and through your drawings. And, because it’s VR, you’re free to use unusual materials such as fire and snowflakes, should you wish.

Senior concept artist Geoffrey Ernault bought an HTC Vive from the official website. He almost gave up after his initial attempt, labelling it “gimmicky” and “hard to get into”. Then he saw Sparth’s images and gave it another go.

“At first I thought Tilt Brush only had a black background and glowy brushes, so I didn’t spend as much time as I should have,” Geoffrey says. “I’m glad I didn’t give up because I’m starting to have a better understanding of how to use the tools to create images I want. It also gives me a sense of scale and depth that I’ve never experienced before.”

“One thing that needs some getting used to is standing up while drawing,” says illustrator Christoph Niemann, who was invited with five other artists to play with the Tilt Brush as part of Virtual Art Sessions, a Chrome Experiment.

“Keep in mind the highest point in your scene,” warns Geoffrey, “and try to limit that, otherwise you’ll have your arms up for the whole duration and you can quickly get arm ache.” He had to jump to reach the highest points in his recent artwork.

Darren agrees that it takes some time to get used to the new workspace. He uses markers on the floor – where the carpet ends, for instance – to provide clues as to his location in the physical room and whether he might need to teleport to another location in Tilt Brush.

“There’s a visible grid that reminds you of your boundaries, but even with that it took a few hours to get to a point where I could really move and not be too timid in movement,” he says.

Also, watch out for motion sickness. It’s like the first time you ride a roller-coaster, says Geoffrey: “It might make you feel a bit sick, but then you’ll get used to it.”

So what of its potential? On a practical level, it’s never been easier for artists to translate 3D ideas into a 3D space. “Another thing I find really intriguing is the ability to experience my designs ‘in person’,” says Darren. “For a long time I’ve debated over whether or not I should get into 3D printing, but I’ve never pulled the trigger because of the costs and software knowledge needed to get a good result.

“Virtual Reality makes that fantasy a reality for people like me who don’t know how to build printable models, or who don’t have access to either a good 3D printer or CNC machine.”

Drew Skillman co-created the tool and is now developing it at Google. He predicts big things. “We believe it has far- reaching implications for creativity and problem-solving in many different fields. Game design is one where we’re already seeing Tilt Brush make an impact, but we’re actively pursuing others like education, fashion, music, visual communication and architecture to name a few.”

All the artists agreed we spoke to that it’s worth finding a rig nearby: try your local Currys PC World if you’re in the UK, or certain GameStop and Microsoft Store locations in the US.

“Prior to trying it I was almost morally opposed to the idea of artist working in VR,” admits Darren. “But going back to a computer monitor or paper feels primitive, cumbersome and difficult to use in comparison,” he smiles. “Tilt Brush was one of those ah-ha moments that flipped a switch in my brain.”

For the latest Tilt Brush art, check out: https://www.facebook.com/groups/TiltBrushArtists

This article was originally published in ImagineFX magazine issue 139. Buy it here.