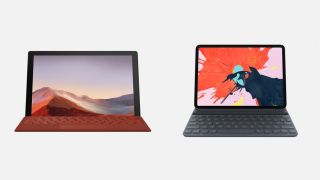 Surface Pro 7 vs iPad Pro – it's a tricky one. The latest version of Microsoft's popular Pro tablet is one of several new products launches recently revealed at the annual Microsoft event. It was also when the tech giant wowed audiences with a couple of innovative looking dual screen devices, including the Surface Neo.

Both the iPad Pro and the SurfacWhile the Surface Pro 7 might be a more low-key release comparatively, there’s still plenty of interest in what Microsoft is doing with the venerable 2-in-1 workhorse of its Surface range. The good news: USB-C connectivity was introduced (finally). The not-so-good news: This still very much looks like the Surface Pro 6 – in fact in terms of design and aesthetics it’s identical – although the hardware inside has been upgraded (as you would hope).

So how much difference do these improvements make, and how does the Surface Pro 7 stack up to the iPad Pro 12.9-inch tablet (which currently tops our pick of the best tablets for photo and video editing) as a result? Let’s find out whether Microsoft or Apple wins for creatives.

Microsoft has upgraded the Surface Pro 7 courtesy of new 10th-gen Intel processors with the top-line chip being a Core i7-1065G7 (quad-core, capable of Turbo up to 3.9GHz). These 10nm (Ice Lake) CPUs also benefit from better integrated graphics in the form of Intel Iris Plus Graphics (Gen11).

There are Core i7, i5 and i3 options, but note with the dual-core Core i3 – meaning the entry-level machine – you won’t get Iris Plus Graphics, but rather Intel UHD Graphics. System memory runs up to 16GB and storage up to 1TB (as before).

What’s particularly exciting for creative types here is the Gen11 integrated graphics. This is considerably more powerful than Intel’s UHD Graphics, and should make a big difference when it comes to all manner of creative applications.

So while the CPU is pretty much the only major upgrade Microsoft has made with the Pro 7, at least it’s an important one. A caveat here is that battery life is apparently worse with the new Surface Pro and Ice Lake: it has over 20% less longevity, in fact, compared to its predecessor, according to Microsoft’s claimed figures. That’s disappointing, naturally.

While the iPad Pro 12.9 might be a device from last year, it sports a very powerful A12X Bionic processor, which Apple designed to be able to easily cope with more demanding creative tasks like photo or video editing. And as we found in our iPad Pro 12.9 review, this chip has plenty of grunt in that respect, and at the time, we were seriously impressed with the iPad’s video rendering performance compared to the Surface Pro 6.

Of course, it’s difficult to draw direct comparisons because of the fundamental differences between Apple and Microsoft’s hardware and operating systems here, but we can say that the Surface Pro 7 is really upping the ante with Ice Lake and Gen11 graphics, so we expect it to be a major step forward on the performance front compared to its predecessor.

We also have to bear in mind that the Surface Pro represents a fully-fledged desktop platform with Windows 10 and a diverse range of software packages therein, and is designed as a hybrid notebook – both a laptop and tablet – whereas the iPad Pro is pitched as a tablet featuring a mobile OS (with an add-on keyboard as a bonus).

That said, iPadOS, the freshly released spin on iOS specifically designed for Apple slates, provides a fuller desktop experience with better multi-tasking and much more besides. It even lets you use a mouse with your iPad – a previously missing piece of the puzzle which proved a point of frustration for some professional users – although support is at an early stage right now, and somewhat wonky (but could well improve in the future).

Microsoft finally introduced USB-C with the Surface Pro 7, something which was long overdue, really. This single connector replaces the Mini DisplayPort, so the latter is no longer present. The downside with the Surface’s Type-C port is that it doesn’t support Thunderbolt 3.

Otherwise, connectivity remains the same, with a USB Type-A connector still here, along with the Surface Connect port, microSD slot and a 3.5mm audio jack. Another fresh introduction on the wireless front is Wi-Fi 6.

The iPad Pro also offers a USB-C port (again, non-Thunderbolt 3), and that’s your lot (it runs with Wi-Fi 5). So clearly, Microsoft’s hybrid wins the connectivity battle, and is better for hooking up external peripherals, even if the firm didn’t go the extra mile in supporting Thunderbolt 3 with the USB-C port (which would have allowed for connecting external GPUs).

Both screens are super-sharp, then, and they’re both gorgeous panels, although the iPad Pro is a good deal brighter. And while the Surface’s screen makes colours pop, the iPad’s support for the P3 wide colour gamut means it’s perfect for photo editing work and professional design or illustration.

This colour accuracy, as well as that extra bit of screen real-estate with the iPad, which could be a very important consideration when it comes to drawing on your tablet, means that Apple has the edge in the display department.

Apple’s second-gen Pencil is a nifty piece of kit, with the stylus being much improved from its initial incarnation. It feels very natural to sketch with the Pencil, and that realistic feel has been improved even further by the introduction of iPadOS, which reduced the latency of the stylus from 20ms to 9ms. This is one slick peripheral, make no mistake.

The Surface Pen is a great stylus too, and also offers a very natural feeling drawing (or writing) experience with all the important features you need like tilt shading. There’s a new version of the Surface Pen, as well – a ‘Slim’ variant for those who prefer a thinner, flatter design. It’s obviously useful to have that choice for those creatives who go the Surface route.

Which pen you might prefer is something of a subjective matter, but generally speaking, Apple’s Pencil gets the nod, simply because it feels more responsive when jotting or drawing thanks to that super-low latency. Some creative pros do, however, prefer the feel of Microsoft’s stylus on the glass of the display.

Finally, note that the Surface Pen is a little cheaper – but on the other hand, the new Surface Slim Pen is more expensive than Apple’s Pencil. Speaking of pricing, let’s discuss that next, so prepare your wallet in advance…

Microsoft’s Surface Pro 7 starts at £799 for the base Core i3 model (without Gen11 graphics) with 128GB of storage, but only 4GB of system RAM. While that amount of system memory is fine for general computing tasks, it’s not really going to be enough for running the heavyweight apps creative types will be using in Windows (or at least not running them well). The next step up is the Core i5 model with 8GB of system memory for £899. Prices top out at a rather staggering £2,249 for the flagship with a Core i7 CPU, 16GB of RAM and 1TB of SSD storage.

Apple’s iPad Pro 12.9 starts at £969 for the 64GB model, which is a pretty stingy allocation of storage. The 256GB version plunders your bank account to the tune of £1,119, and if you want the maximum 1TB capacity the bill is £1,519. Those are all Wi-Fi models, with the cellular versions of the iPad costing even more.

As for the accessories, the Smart Keyboard Folio will set you back £199 (ouch), and the Apple Pencil is £119.

So with the Surface Pro 7, you’ll likely need to gun for at least the Core i5 model, which when kitted with the keyboard and stylus will set you back a total of £1,124. If you get the base iPad Pro and think you can manage with 64GB of storage, that will total £1,287 when fully kitted with both keyboard and pen accessories (though you may well want to push further than that very basic amount of storage).

Both devices are pretty expensive, then, for the full hardware setup, but Microsoft appears to win as the (relative) value proposition on the face of it. However, if you want a higher-end Surface Pro 7 – and you’re considering going for the Core i7 processor for the beefiest performance levels – the value scales tip back towards Apple. Whatever iPad Pro you’re buying, you get the same power level, of course; the only difference in the hardware is the amount of storage (and whether you opt for cellular data).

On an overall level, these are both very impressive portable devices, often being on a fairly even footing in the various important categories we’ve discussed.

But from a broader perspective, the Surface Pro 7 is the all-rounder champ. By which we mean it offers a full desktop OS experience with Windows 10, and all that entails. In short, it’s a more versatile jack-of-all-trades device with a bristling software ecosystem and a better keyboard (plus trackpad), and better connectivity (wired and wireless) for hooking up peripherals which may help your workflow and productivity (like a mouse).

The newest Surface Pro also makes an important processor upgrade which will help with performance in creative apps, and widens its appeal in terms of being able to enjoy a spot of light gaming with Intel’s Gen11 graphics. It’s a fully realised portable computer, as opposed to Apple’s iPad Pro which remains a tablet with strong computing aspirations.

Indeed, buying Microsoft’s 2-in-1 could mean that you might not need a second machine for your other computing needs – which could have major cost-saving implications. Simply put, it’s a fully realised portable computer, as opposed to Apple’s iPad Pro, which remains a tablet with strong computing aspirations.

On the flipside, the Surface Pro has barely changed in several iterations now. It almost feels like Microsoft rather forgot about the 2-in-1, shoving it way down the priority list while the company was busy concentrating on all its other shiny new Surface products.

Furthermore, it’s a bit chunkier (and heavier) than the iPad Pro, and the design is starting to look a little static and tired now, or even slightly dated we might argue, with those rather thick tablet bezels. Apple’s tablet is sleeker looking with a somewhat better screen and thinner bezels, and that means something in the real world. If you’re a creative freelancer, say, visiting a client’s office to show them some of your work on your tablet, which device do you think will make you look more ‘cutting-edge’?

With a superior stylus peripheral too – although that judgement is rather subjective, granted – and plenty of power, the iPad Pro wins out as a device for creative pros. But it’s a close run race, particularly if the Surface Pro’s broader all-round computing capabilities appeal to you.