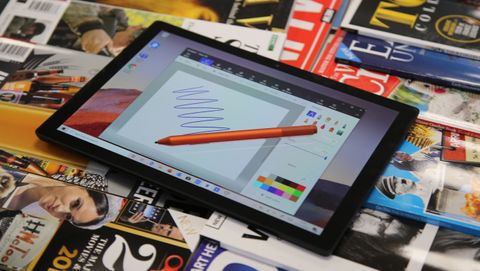 The Surface Pro 7 is Microsoft’s seventh attempt to create a tablet that’s powerful enough to run full Windows 10 programs, while remaining sleek and light. While Microsoft might be best known for its software, with the Surface range of products, it’s also built a rather impressive reputation for building stylish and desirable devices that have proven popular amongst digital creatives, even if mainstream success has still alluded it.

The Surface Pro line-up of tablets is supposed to be Microsoft’s flagship Surface device. However, while the original Surface Pro felt fresh and exciting, recent generations have felt a little stale. After the Surface Pro 6 proved to be a solid – yet unexciting – entry, many of us were hoping that Microsoft would really pull out the stops with the Surface Pro 7, and reignite our enthusiasm for the products.

Unfortunately, Microsoft has made just another iterative upgrade with the Surface Pro 7. Its design is pretty much identical to the Surface Pro 6, but there have been some tweaks behind the scenes. So, is the Surface Pro 7 a good tool for creatives? Should it get a spot in our pick of the best tablets with a stylus? Read on to find out.

As with previous version of the Surface Pro, the Surface Pro 7 comes in a variety of configurations. The base model costs $749/£799, and this gives you an Intel Core i3 processor (CPU) 4GB of memory (RAM) and a 128GB solid-state drive (SSD).

This is actually a cheaper price than the Surface Pro 6’s base model when it launched, which cost $899/£879.

It’s still very pricey for a tablet, however, especially considering Apple’s excellent iPad Air costs almost half the price at $499/£479, whilst the iPad Pro 11 costs $799/£769.

It’s also pretty expensive when you consider those specs. For any sort of creative work, 4GB RAM is just not enough – and that 128GB hard drive is going to fill up quickly if you store large files such as photos and videos.

So, for creatives, you should only be considering configurations with at least 8GB of RAM and 256GB storage. A version of the Surface Pro 7 with those specs, and a more powerful Intel Core i5 processor, begins at $1,199/£1,169.

It’s also worth pointing out that even with these high prices, the Type Cover (which protects the screen and doubles as a keyboard) and the Surface Pen stylus are not included – so you’ll need to buy them separately at a cost of $160/£149 and $99/£99 respectively.

One of the biggest benefits the Surface Pro 7 has got over its processor is that it uses Intel’s latest 10th generation processors, which use the new 10-nanometer (nm) process – whereas the Surface Pro 6 used CPUs with the 14nm Intel process. Now, we won’t bore you with loads of jargon, but what this essentially means is that Intel has made a new series of processors that are more powerful and also power efficient.

So, with products like the Surface Pro 7, you should see improved performance and battery life compared to the Surface Pro 6. In our time with the Pro 7, we certainly felt that the new tablet was a lot faster, with Windows 10 feeling smooth and responsive when in use.

Intel has also improved the integrated graphics of its 10th generation processors, now using Intel Iris Plus graphics over the older Intel UHD graphics. This means that the Surface Pro 7 is better at handling graphic-intensive tasks, such as video rendering, as well as even some light gaming.

Now, this won’t be able to compete with a device with a dedicated graphics card, but we were seriously impressed with the integrated graphics performance of the Surface Pro 7. It’s able to do a pretty good job at handling graphics whilst still remaining thin and light.

The model we tested came with an Intel Core i5 processor, 8GB RAM and 256GB storage, and it handled most day-to-day tasks well. We installed some pretty intensive apps, like Photoshop, which worked well, and when using the Surface Pen stylus, the Surface Pro 7 was able to keep up with our scribbles without much noticeable lag.

However, if you go for a version of the Surface Pro 7 with less powerful hardware, you may find that your experience isn’t quite as smooth as ours.

When using the Surface Pro 7 for even more intensive tasks, battery life dropped even further, with it achieving just three hours with the PCMark 8 battery life test, which replicated document creation and video calling.

This is a worryingly short battery life for something you may want to use throughout the day. For a longer battery life, we’d recommend the older Surface Pro 6, then, or one of Apple’s iPad competitors.

The Surface Pro 7’s screen is 12.3-inches, with a 2,736 x 1,824 resolution and 3:2 aspect ratio. That offers a pixel density of 267 pixels per inch, and results in an impressively sharp display that’s also bright and vibrant.

As you’d expect, it’s also touchscreen, and when in tablet mode, Windows 10 works well, changing the interface to better suit being jabbed at by fingers. It doesn’t support standards like sRGB or P3, which means if you’re after a tool that offers industry-accurate colours, then this is probably not the right device for you.

It’s effectively the same screen as the one found on the Surface Pro 6, and while that’s not a particularly bad thing, as the Pro 6’s screen is pretty lovely anyway, it’s a bit of a shame that Microsoft didn’t take the opportunity to upgrade the screen with the Pro 7 – especially if it wants to win over creative professionals.

Perhaps the biggest selling point of the Microsoft Surface Pro 7 is that it is a tablet that’s able to run Windows 10 in full, while also being able to turn into a laptop if you need to fire off some emails (and have the optional Type Cover).

If you do grab the optional extras, you’ll find the Microsoft Surface Pro 7 to be a very versatile device. The Type Cover is made of a gorgeous Alcantara fabric which feels lovely, and gives the Surface Pro 7 a premium look and feel.

Despite doubling as a cover, the Type Cover also does a good job as a keyboard, with the keys being large enough to hit accurately when typing fast, and with enough travel to make them feel satisfying when pressed.

Of  course, if you don’t want to spend extra on the Type Cover, then you’ll miss out on these features. We really wish Microsoft would include the Type Cover, and the Surface Pen (which works brilliantly), as they are essential to getting the full Surface Pro 7 experience – especially if you’re a creative.

The Surface Pro 7 also at long last features a USB-C port, bringing it in line with many modern devices. It’s great for people who have a growing collection of USB-C peripherals. However, it is not Thunderbolt 3, which means it can’t quite reach the speeds of the ports found on the MacBook Pro.

However, where the Surface Pro 7 does have an advantage over the MacBook Pro (and iPads) is the selection of ports. Alongside the USB-C port is a standard USB port, for older peripherals, a Surface Type Cover port, which makes it easy to connect the Type Cover, and a MicroSDXC card reader – this is particularly useful for photographers, and its absence with the MacBook Pro is something we’ve often complained about.

Power is supplied via the Surface Connect port, which is a magnetic power port that makes connecting and detaching the power supply quick and easy.

Surface Pro 7 review: Should you buy it?

The Surface Pro 7 is a tempting device if you’re looking for a tablet computer that has enough power to run full Windows 10 programs. If you don’t want to be stuck using Android or iOS apps, which can often feel stripped down compared to their Windows 10 counterparts, then this is one of the best Windows 10 tablets you can buy.

However, while it’s undoubtedly a stylish and powerful tablet, it does feel like Microsoft hasn’t put a lot of passion into this version. Everything seems like a little iterative upgrade, rather than a revolutionary leap.

This means that the cheaper Surface Pro 6 is a better buy for people on a budget, as you’re not sacrificing much – and you get a better battery life as well.

Ultimately, the price of the Surface Pro 7 will determine if you should buy it. At it’s current price, it’s just too expensive when compared to the iPad. Apple’s tablets offer a comparable experience with better battery lives, and for a lot less. Sure, they don’t run Windows 10 apps, but iOS apps have come a long way, and they now offer features and performance that are just as good as the Windows 10 versions.

Meanwhile, there are plenty of Android tablets out there which offer even better value for money.

Unless you’re really wedded to Windows 10, we suggest skipping the Surface Pro 7. Hopefully Microsoft will come back with a new Surface Pro in 2020 that will give creatives a reason to fall in love with their devices again.