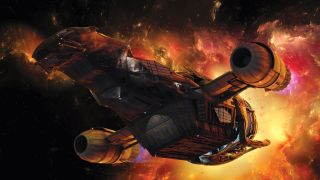 In September 2002, Joss Whedon's sci-fi TV show Firefly premiered on Fox. Set 500 years in the future after a civil war, the show followed the adventures of Captain Malcolm Reynolds and his ragtag crew as they strived to make a living – legally or otherwise.

After airing 11 of its 14 produced episodes the show was cancelled, but despite its short life, Firefly went on to gain cult status. The show's post-cancellation success has allowed Whedon's tale to continue to live on through comics, board games and regular 'Browncoat' fan meet-ups.

Zoic Studios, which worked on the show's visual effects, also happens to turn 15 this year. Bagging a Creative Arts Emmy Award for its outstanding visual effects on Firefly, the show was paramount in solidifying Zoic Studios as one of the most forward-thinking creative studios of its time.

Set in an all-encompassing, otherworldly universe, the team were tasked with creating not only the iconic Serenity ship but the living, breathing world that Malcolm Reynolds and his crew reside in.

"We were interested in changing computer-generated imagery and throwing out the concepts and notions of how to film in digital space and we really kind of leaned into that," he explains.

"Joss wanted the audience to participate with the Firefly family in a voyeuristic way. He wanted us to be in the kitchen, on the bridge. He wanted us to follow Malcolm Reynolds down the hall and into his room; he really wanted the intimacy and this voyeuristic sense of presence and that was achieved in a number of different ways.

"In order for something to feel authentic in the universe of Firefly, there had to be a camera operator. So no matter where we were – in space, on the planets, in the ship – there was a person and an artist on the machine who was a camera operator, watching the scene.

The world of Firefly is messy, but that's what sets it apart from most sci-fi shows; while sleek, clean design is a trademark of Zoic Studios' success, it was also able to make way for a much more human touch, crafting a universe that felt real while still transporting the audience to another dimension.

"We wanted dents and dings and scratches. We wanted dust on everything, so we actually had dust mattes that we would apply when the ship was on a planet as opposed to having it always pristine clean. The world of Firefly would always get dirty," Peristere says.

As with any sci-fi show, a fundamental aspect of its success lies with the design of its ship. Serenity would not only be the home of Malcolm Reynolds and his crew but also the audience, allowing us to witness these characters at their most vulnerable while also offering up some of the most exciting visual sequences in the series.

"I think this is one of those things on all sci-fi shows that everyone wants to be a part of, certainly when you're creating something that's going to be iconic," Peristere explains.

"We wanted to make it legitimate – how does it travel in space versus how does it travel on the ground. So what Carey [Meyer – production designer] did is he worked with Joss purely from a design aesthetic – we wanted it to be part Millennium Falcon, part Big Bird – a long neck was really important to Joss. He really wanted this idea that Malcolm could sit up on the bridge and look out over the world that they were moving in between.

"Over a weekend, Carey basically made a paper model sculpture and we were able to take it over from there. So when you see the paper model, you'll see where we really started to revert because what we wanted to do was to make something that was entirely pragmatic and functional. We can go on about it but even all the way through Serenity, we were tinkering with the ship, all the way to the end."

Smith points out the evolution of the ship from the pilot episode to the 2005 spin-off movie Serenity, claiming that the detail was "three times better."

"We would hand paint the grease around the bolts because we wanted it to be right, but we didn't have time to do that initially, so we kept going back and doing more and more and more," Peristere continues.

"The ship for us, we really wanted it to feel lived in, so we thought about that in terms of the paint job. We also wanted it to feel old so you'll find that there's metal on the ship from, what we considered, errors of (damage over) the ship's life span, so it's been fixed over and over again over time."

This same approach was used for the Reavers' ship but with even more of a 'mash-up' design. "We came across that as a bunch of different ships bolted together. We kept talking about Tankers and the evolution of the Reavers' design. We took that and mashed it up with Mad Max and we imagined – which eventually you see in Serenity the movie – this wasteland where the Reavers hang out, that's just where they build their mean machines," Peristere says.

"The first Reavers ship that you see in the pilot – the front end of that ship, it's almost like a luxury cruise liner and they just chopped it in half and then modded it up from there and made it disgusting."

One of the show's most iconic sequences is the train job, which sees Serenity hover alongside and over a moving train in order to allow Malcolm and his crew to rob it. Smith remembers that he and Peristere took a trip to Arizona in order to gain inspiration for the desert world they would be creating.

"It was so hot there – we couldn't park our car at the side of the road because we were frightened it would catch on fire. And our shoes pretty much melted," he says. "Looking at it now, it looks dated but at the time, it was probably one of the better-looking CG environments."

The VFX of the unique worlds

The team were given roughly five to six weeks to work on each episode and as Kristen Branan – who was working as the visual effects producer on the show – explains, the world of Firefly was only able to be created through mutual understanding between the visual effects team and the production team.

"They understood that we were making a unique world for every single episode," she says. "We absolutely used every minute of that time because we had to wrap our head around the description in the script. We had to come up with concepts, we had to be on set to see how they were filming and then re-tailor our ideas to how they filmed it.

"So much of the work that we produced was 100 per cent CGI, and that's super difficult to do when the descriptions were as unique as they were on that TV show."

The team was small and with limited resources. "At the beginning of the series, we were still a start-up VFX house. So in those beginning months, we did not yet have a central production database, so everything that we talked about and organised was on these giant white boards. I was plugging my computer into our fax machine to send stuff over to Fox because we didn't have internet on our computers, nor did we have email at the beginning of the show. So I'm getting phone calls from production and I'm writing up notes and I'm running around with pieces of paper to put it in people's notebooks," Branan says, laughing.

"All the money that we were using went right back onto the screen. We couldn't even see how to play back our shots. We got a little monitor and deck and we put it on what was basically a library push-cart and we were going [from] desk to desk so the guys could watch their shots in context of the scene."

Looking back on Zoic Studios' last 15 years, it has worked on 4,800 different TV shows, 1,000 feature films, commercial and design projects, and delivered 340,000 final shots. Firefly may be but a twinkle in the mass of Zoic Studios' creations, but it remains one of its proudest moments.

"I think for everyone in visual effects, you look back at those one or two projects that stand out in your career, and I think for many of us, Firefly was one of those stand-out shows," Branan says.

"It was just really ahead of the time and some of the work that came out of it is amazing even to this day. I would love to see that show made again. There's just so much potential for new looks and more storylines."

This article was originally published in issue 229 of 3D World, the world's best-selling magazine for CG artists – packed with expert tutorials, inspiration and reviews. Buy issue 229 here or subscribe to 3D World here.