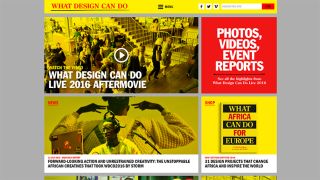 Each generation likes to believe that its problems are unique. That’s not true, of course, but this suspicion could nevertheless cross your mind when you read the apocalyptic statistic that 60 million people have been forced to leave their home, according to UN refugee agency the UNHCR. Never since World War II has there been a greater number of refugees looking for a safe place to stay.

In February, the What Design Can Do Refugee Challenge was launched – which calls on the global creative community to submit ideas to improve the lives of refugees in urban areas – with support from the UNHCR and IKEA Foundation. Since doing so, some designers have asked whether this competition raises false hope. After all, the crux of the refugee problem is political,  and nothing to do with experimental design ideas.

That is true. But at the same time we believe that the issue is too big for national governments, too big  for NGOs and too big for the divided European Union. And although it’s certainly too big for designers, we can offer something that others cannot.

Without question, the political dimension to this problem limits the scope of the task for designers. But such limitations are nothing new – quite the contrary in fact, since good design positively thrives on limitations. Designers excel in finding creative solutions and opportunities within given limitations. We’re also great collaborators, accustomed to tackling complex situations in partnership together.

Designers can offer fresh input on two fronts. The first is practical. The journey undertaken by refugees from their homeland to a safe haven is dotted with challenges, and hence opportunities, in the domains of accommodation, language, safety, transport, physical protection and much more.

In 2015, for instance, the IKEA Foundation demonstrated with Better Shelter — a flat-pack design for a living unit — that designers really can improve the initial provision of accommodation. Meanwhile, British design collective Embassy For The Displaced makes practical rucksacks for refugees out of the rubber boats on which they cross to Lesbos. And last year, using digital media, designers in Germany needed very little time to produce a phrasebook for refugees.

The second front concerns offering the prospect of a brighter future where politics has failed to do so. One of the entries to the Refugee Challenge is Co-Labor-Aid, a version of LinkedIn that connects refugees with local networks. Reframe Refugees is another idea, this time for a refugee photo press agency, which enables refugees to provide the media with pictures taken during their journeys and reframe their predominant image.

At the Democratic Days event organised by the IKEA Foundation in Zurich, where the What Design Can Do Refugee Challenge was launched in February, the writer and philosopher Alain de Botton spoke of the power of good design. He paraphrased 19th-century French writer Stendhal, who claimed that beauty is nothing other than the promise of happiness: “La beauté n’est que la promesse du bonheur.”

According to De Botton, good design helps us bring out the best in ourselves. That’s what this challenge is also about: bringing out the best in ourselves. It’s also the reason why the challenge didn’t stop when the deadline for entries closed on 20 May. After that, a period of refinement and feedback started: experts are asked to react to the concepts and try to help make them better, before the shortlist is announced. We believe that by sharing the ideas and commenting on them, we can make the concepts more powerful.

Besides, the five challenge finalists don’t just get 10,000 euros to develop their concepts. They are also entered into a special accelerator programme, where they can test and improve their ideas with the help of experienced designers and experts in the field of humanitarian support.

Everybody who flees from war, violence or human rights infringements deserves shelter and solidarity. Yet the receiving communities are ill-prepared for the sudden arrival of so many people who are often distressed, traumatised and bereft of all possessions. This challenge is a call to action for our generation of designers who secretly believe that, despite our turbulent past, the present problem is without precedent. After all, there’s another saying that the Dutch have: each generation has to solve its own problems.

This article was originally published in Computer Arts magazine issue 255. Buy it here.