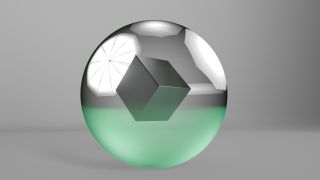 Using Dome lights has been one of the greatest advancements in CGI creation over the past few decades. Bathing a scene from every direction used to be computationally intensive, but with advances in both hardware and software, the Dome light has emerged as an efficient way to start lighting a scene.

This is because a Dome light can embed an Image-Based Light Image (IBL, also known as HDRIs) which are a single image of a real environment or one created by an artist, which when mapped into a dome light instantly re-creates the lighting environment.

These images are usually saved in a 32-bit format, which captures nearly the full range of available light and allows lighting to be created with a rolling falloff and no ugly clipping or banding.

While there are applications that can create IBLs, there are countless images available which re-create everything from a rocky vista to a photography studio.

Dome lights are highly computationally efficient, which means it can be a good idea to use a spherical camera in an existing scene to create an HDRI map of the background. You can place that in a version scene which creates no loss of light fidelity, but allows the artist to concentrate on the primary geometry with little or no slowdown.

The biggest caveat with using Dome lights is that they solve so many problems that it can be easy to neglect other light types. This can be a mistake, as adding extra light to highlight key objects will always make a scene feel more alive than just using a Dome light.

A Dome light in its simplest form is a light object that surrounds the scene in a constant white light from all directions. As soon as a Dome light (Skydome or Environment are other commonly used terms) is placed it creates an instantly pleasing soft ‘studio’ look, which would be hard to re-create with any other type of single light object. Be warned that not all applications show the Dome light as a visible object, especially when it is for a third-party render solution.

While Dome lights are most commonly associated as a base for image-based light sources, this doesn’t mean that there aren’t other ways to light a scene with them. One of the easiest and most powerful ways for a creative effect is to use a ramp or gradient texture to feed in a range of colours into the Dome light to produce a more interesting look. As the Dome light is a physical object in the scene it can be rotated to easily adjust the look you are after.

Using an image with a Dome light is a really effective way to add a much more realistic look to a scene. High Dynamic Range images which contain a full 32 bits of colour data are the best format to use with a Dome light, as they allow exposure to be adjusted without any clipping. Otherwise, the coloured areas in an image can either go to white or black as there is not enough colour data, which can in turn create some ugly, unwanted image artefacts.

While many HDR images come with additional background images, it is still a good idea to ensure that the HDR is invisible to the alpha channel and potentially to the camera itself. This means that the Dome light is only lighting the geometry and creating interesting reflections rather than getting in the way where it is not needed, such as skies. Also, not having the background enabled can save on render speed, as the computer only needs to render the areas that are visible.

More from Mike Griggs at Vertex

Vertex is the event connecting all areas of the UK visual effects community, for a day of presentations, workshops, recruitment and discussion.

Not only will Mike be there, guiding you through the fundamentals of 3D, but there will be a large group of speakers discussing all manner of topics related to VFX and CG.

Come to watch talks by some of the world's biggest names in VFX, including Scott Ross, Chris Nichols, Sébastien Deguy and more.

Book tickets for workshops run by top artists, from Mike Griggs to Glen Southern, among others.

If you want to get your hands on the very latest tech, then the expo access tickets are for you and are even free, but you do need to register, so book now over at the Vertex site.