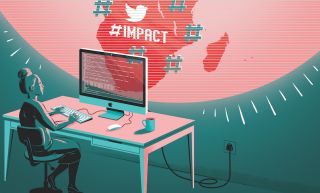 You can see Catt Small live at Generate New York on 28 April, where she will present a talk on how to get more done in less time. If you want to find out why stepping away from process and tools can be helpful, and how to ship products sooner, buy your ticket today.

Many people in technology want to use their skills to help others. However, creating a digital product that improves society is harder than it sounds. Countless social good hackathons have been organised, yet many products created during these events fail to become anything more than a mention in a recap article. I’d like to explore the reason why this experience is so common and how to avoid it.

Technology has impacted our lives a lot, especially in the last century. Just look at the size of a 32GB SD card now versus 5MB in 1956. It’s mind-blowing to think that they had to airlift storage drives smaller in disk space than a modern high-res photo. The impact of technology was felt across different fields. Bullet trains are amazingly fast. We can hold video conferences, write novels, and edit photos with our wireless phones. People can schedule appointments and consult doctors online using healthcare apps.

Because technology improved so many things, people began to see it as a solve for all issues. However, it doesn’t always make things better. Although technology can help, it can’t solve problems by itself. Human interaction is necessary for technologies to be effective. People must choose to use them. A to-do app must ensure that people form a usage habit. A social game must get people to play together for it to maintain relevance.

So why do we think about tech as a silver bullet, even when it’s repeatedly proven it’s not a solution for everything? Let’s break down this mentality so you can understand how to unlearn it.

Many people naturally want to help others. We see problems happening and we want to fix them. As designers and product creators, we aim to build things that solve needs. This makes us think technology can be applied to anything, regardless of the context.

People in tech are often held up as the smartest in the world. We’re also told quite often that we’re doing the best work of our lives, that we’re changing the world, and that we have the power to make change happen. This combination of messages leads to the inflation of egos.

Instant gratification is also a factor. We’ve come to expect things to change faster and faster as technology improves. We think that technology can make anything happen, and that it can happen now. Our thought process regarding technology is heavily fuelled by privilege. We are idealistic. We forget that people don’t always have equal access to tech. We forget that some people have different relationships with tech. We forget that the happy path isn’t the only path and sometimes lack the context to help new technologies get adopted by our target audience.

The result is a Frankenstein’s monster of privileged, egotistical problem-solvers with a need to be instantly gratified. This combination is bound for failure. It is also often harmful.

Social media networks are a great example of this effect. When they catch on and become a habit, people gain a larger reach. Twitter and Facebook are two of the most popular networks where netizens can publicly share ideas with friends and strangers.

Hashtag activism – sharing opinions about political topics via social networks – is great for awareness. In the United States, Occupy Wall Street and movements like Black Lives Matter started on Twitter. Occupy Wall Street generated momentum that led to political parties discussing the issues it focused on. But these movements are now mostly organised in person.

A big issue is that many networks fail to protect their users from negative experiences. Facebook and Twitter are notorious for allowing hate speech and harassment to continue, despite constant reports and complaints. Many well-known creators, writers and actors have decided to leave Twitter after being doxxed, hacked or threatened by hundreds of anonymous people.

Social media is a useful way to shed light on social issues and catalyse conversation. However, it cannot change society by itself. Any country can decide to throw all that change out of the window by blocking its citizens from these kinds of sites, and people will not stop abusing others just because of a real name policy.

We need to modify the way we think about technology. We must be less idealistic and understand the place technology sits within our lives. As Jared Cohen of Google said in an interview with NBC News, “technology is not a silver bullet answer to the world’s problems”.

In 2015, I embarked on a journey to design a piece of technology that would help people. Rather than focus- ing on the technology, I decided to create something that would augment the process of real-life change. This project ended up being a sex education game called SenseU. Here are some lessons I learned during the process of creating my game.

Be humble and assume nothing. Technology is awesome, but your skillset is limited. That’s how being human works. There is always more you can learn. Acknowledge and shed your biases before beginning your project. They will only harm you in the long term.

Do your research. Locate your target audience by digging into data found in books and studies. If those yield no results, do empirical research. A quick Google Form can garner hundreds of results via social media connections and shares.

Design using data. Always question your gut. Let the research you gather inform your decisions. The who, what, when, where and why will define the how. When choosing the form the project takes, consider looking outside your skillset. Just because you might know how to code doesn’t mean it has to be an app or website.

Ask for help and listen to others. This is important to ensure your project is usable, reaching the right audience, and actually helping that audience. Reach out when you find yourself lost. Feedback is crucial, especially for projects focusing on social good. If you are designing for a different group than your own, open your ears even more and see if you can identify core problems rather than surface ones.

Consider possible negative scenarios. Bad things happen all the time. Don’t label them as edge cases. Create failsafes for cases in which things could go worse than you’d like.

Accept a slower pace. We are very used to instant gratification, but social change takes time. Even though we like to think people are less ignorant than in previous generations, classism, racism and sexism still occurs. Things can’t and won’t change overnight.

Technology requires people to work. Without adoption, solutions won’t stick. A solution isn’t always the right one, and solutions without failsafes may have disastrous effects. Therefore, ensure that your work is taking the right form. Only then can we create truly socially impactful designs.

Catt Small will show you how to get more done in less time at Generate New York, which features talks on conversational UIs, information architecture, design systems, user research, ecommerce and performance and much more.