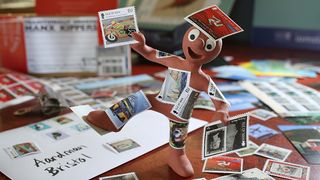 Famous for its humorous films about chickens in a prison camp and a cheese-loving eccentric with an eye for spaceship design, Academy Award-winning animation studio Aardman celebrates its 40th anniversary this year. To mark the occasion, the Isle of Man Post Office has created a special collection of stamps featuring some of the studio's most beloved characters.

The set of eight stamps includes six iconic moments from some of Aardman's most famous films, plus another two which feature specially created images of Morph visiting the Isle of Man. Set to be released on August 12th, the collection is available to pre-order now.

"We're delighted, and honoured to be celebrating forty years of great characters, good humour and thoroughly British comedy with these lovely Isle of Man stamps," say the Co-founders of Aardman, Peter Lord and David Sproxton, who both endorsed and approved the collection.

For Maxine Cannon, the Isle of Man Stamps and Coins General Manager, it was a proud opportunity to work with Aardman on such a nostalgic collection. "It was a really special day when Morph came into our office, especially watching him lark about in the sorting office!" says Maxine. "We are committed as a business to encourage innovative thinking, and we hope that these stamps continue to inspire creativity amongst our community."