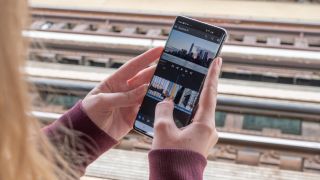 Adobe Premiere Rush, Adobe's video editing software, was launched at Adobe Max in October last year. The software is available for iOS, Mac and Windows on the desktop, so Android users, once again, felt left out in the cold.

However, they haven't had to wait too long, with Adobe today announcing Premiere Rush for Android. But why now? Over the years we've seen many companies, Adobe included, wait years before rolling out an Android version of their latest software, so it may come as a surprise to some to see Premiere Rush arrive on Android just seven months after it was initially launched.

But the Adobe team are a business-savvy lot, and with more and more content creators using their phones to create videos on the go, it makes total sense to be able to offer the app to what Macworld reported earlier in the year as the more popular mobile platform.

"What we've been seeing recently is a huge explosion in online video content creation, especially on social media," says Adobe Premiere Rush principal project manager Danielle Darby. "And upon further investigation, we found these online video creators are different from our professional creators and have very unique needs, which we want to focus on with Rush."

That focus is on the ability to create professional-looking results fast, without delving too deep into getting the perfect edit like one might have to with Adobe's more complex, professional editing tools such as Premiere Pro or After Effects.

"Our goal is to make creating and sharing online content easier than ever," Darby says. We've yet to give Rush a go so can't say yet if Adobe has achieved that. A quick hands-on with the iOS version of the software looks promising, but we'll be putting Rush – on both iOS and Android – to the test in a full review very soon so stay tuned.

Adobe Premiere Rush is available on Android now, and you can get for free via the Premiere Rush Starter Plan, which includes access to all its features, plus the ability to create an unlimited number of projects (but limited to three exports). Premiere Rush is also available for $9.99 per month to individuals via the Adobe website, Samsung Galaxy Store or Google Play Store. Rush is also included as part of Adobe's All Apps, Premier Pro single app and Student Plan Creative Cloud memberships.