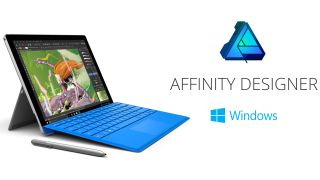 Following the beta release of Affinity Photo for Windows last week, today sees Affinity Designer becoming available to PC users. This is sure to be a welcome move for artists, designers and creative directors eager not to be tied down to a subscription service, as well as finally puts the app into the hands of people that don't use Macs.

Just as with Affinity Photo's Windows release, this version of Affinity Designer will match its Mac counterpart feature for feature. These tools include a complete vector and pixel editing toolset, 10 million percent zoom, non-destructive effects and adjustment layers, plus much, much more.

Built with the same back-end code as the Mac version, Affinity Designer for Windows allows for cross-platform file compatibility. The app also has the same memory management and rendering technology that delivers Affinity Designer's renowned, blistering speed. Designed to work on 64 bit Windows 7 and above, the release is topped off with support for wight languages.

“When we launched Affinity Designer we never expected the impact it has made," says Ashley Hewson, Managing Director of developer Serif. "Seeing it so widely adopted by designers around the world – and all the incredible work people are creating with it – has been such a rewarding experience for the team here.

“We’ve released many updates to Affinity Designer since launch, adding hundreds of new features which users asked for. But by far the biggest single request has been for the Windows version so we’re delighted to finally deliver that.”

Affinity Designer for Windows is available right now and can be purchased direct from the Affinity site. Retailing at $49.99/ £39/ €49.99, this version comes with updates included.