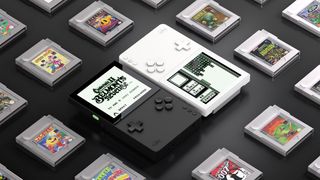 If you have fond memories of playing Tetris or Pokémon on a chunky '90s Game Boy, an upcoming console from American tech company Analogue is sure to appeal to your nostalgic side. That's because the Analogue Pocket can play classic Game Boy cartridges, and it makes them look better than ever before.

Given that the Game Boy inspired generations of creatives to make their own games and pixel art, this release is sure to go down a storm with readers of a certain age. After all, an emulator just isn't quite the same as slamming in a cartridge and giving your thumbs a good workout on a portable handheld system.

Described by Analogue as a "tribute to portable gaming", the Analogue Pocket is compatible with the 2,780 plus cartridges that Nintendo put out for the Game Boy, Game Boy Color and Game Boy Advance. And with the help of an adapter, it can also play retro games from Sega's Game Gear, SNK's Neo Geo Pocket Color and the Atari Lynx.

Scheduled for release in 2020, the Analogue Pocket has a screen resolution of 1,600 by 1,440 pixels. To put that in context, that's 10 times the clarity of the original Game Boy screen. It also has a 3.5-inch LCD screen and "pro level color accuracy," meaning that your favourite games from yesteryear will look crisper than ever.

However, if you spent your youth with a Game Boy permanently gripped in your hands, the layout of the buttons on the Analogue Pocket might play havoc with your muscle memory. Not only are they unlabelled, but the 'start' and 'select' buttons have been moved to the right-hand side of the console.

Another nice touch is the inclusion of a music creation software called Nanoloop. This pre-installed tool works as a sequencer and synthesiser. This is a welcome addition considering that the Game Boy's previous music program cartridge, the Little Sound DJ, is as rare as hen's teeth.

If you want to get your hands on an Analogue Pocket, head over to the Analogue site now and sign up with your email address. The console will ship for $199, which is pretty reasonable when you remember that back in the day a Game Boy would set you back $89.99.