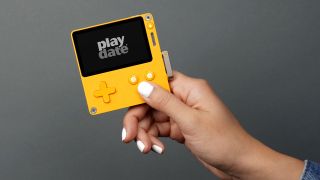 We don't normally get over-excited about games consoles on Creative Bloq, but this one's an exception. Panic, best known for its Mac and iOS apps – and more recently for publishing the wonderful, thoughtful and atmospheric Firewatch – has just announced the Playdate, and it's without doubt the most beautiful and intriguing gaming handheld we've ever seen, and an amazing piece of experimental design.

Developed over the past four years, it's a handheld system with a difference. It's bright yellow with the most amazing industrial looks, it features a black and white, high reflectivity screen, and it has all the connectivity you'd expect – Wi-Fi, Bluetooth, USB-C and a headphone jack.

The most bonkers thing about it? An actual crank on the side, a flip-out rotating analogue controller created by Teenage Engineering, the Swedish electronics boffins best known for their gorgeous, tiny and expensive synthesisers (you doubtless have at least one friend who won't stop bloody going on about them). As well as supplying the crank, Teenage Engineering collaborated with Panic on the Playdate's design and build.

Another sweet touch is how you actually play games on it. Rather than buy them as-and-when, when you get your Playdate a 'season' of 12 games is included. Once the Playdate launches they'll be delivered over-the-air, once a week for 12 weeks, and part of the fun is that each one will be a surprise – you won't know what you're getting until the new game light flashes.

Panic says it has recruited some of the world's best game designers to create the Playdate's titles, including Keita Takahashi, creator of the legendary Katamari Damacy. The one Playdate game that Panic is talking about is Crankin’s Time Travel Adventure created by Takahashi, in which you use the crank to control the flow of time and get Crankin' to his date with Crankette while avoiding ridiculous obstacles. Other top designers making games for the Playmate include Zach 'Spelltower' Gage, Bennett Foddy and Shaun Inman.

If you want a closer look at the Playdate, get out your phone and check out Panic's media kit; there are couple of AR options available that'll let you put a virtual Playdate wherever you like. We've wasted a lot of time this morning playing with it already.

The Playdate is due to ship in 2020 for $149; pre-orders will open later this year, but Panic advises that there's going to be limited stock, so you should sign up for its mailing list right now if you don't want to miss out.

Want to know more? Our friends at Edge magazine have loads of inside info; it's all in issue 333 which is available in stores today, or you can buy it online.