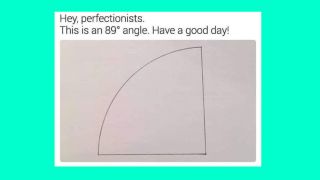 There's nothing like a good internet meme to get people raging. And while a lot of the latest memes involve the latest developments in politics, if the last few days have taught us anything, it's that there's always room for some anger about an angle.

The latest graphic design meme to do the rounds on Twitter and Reddit is a pencil drawing of an 89° angle, with the text 'Hey perfectionists. This is an 89° angle. Have a good day!' The post hasn't quite made it to our list of realistic pencil drawings, but give it time.

Not surprisingly, given the highly distressing nature of the post, it all kicked off pretty quickly. When Tobias Van Schneider posted the meme on Twitter, he said: "I can barely look at this".

Others were similarly affected:

While others took a more technical angle:

Agree. The arc length also appears to exceed the angle.September 4, 2019

Over on Reddit, users were infuriated by the post itself, with user RoeHogan saying: "The amount of times this has been posted is mildly infuriating."

While there was some good old-fashioned debate of (ahem) varying degrees of pedantry:

While Haribo112 replied: "No it is 89. The straight bit and the curve indicate it is to be measured from left to right. The reason it looks more like 85 to you I because of the height. A 1 degree change at the base of the angle will lead to a very noticeable deviation at the top."

More angles, are, of course, developing all the time.