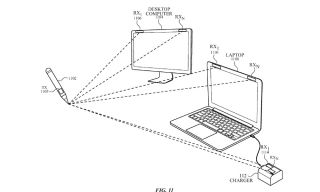 A recently filed Apple patent could shake up how artists use digital drawing tools – if it ever becomes a reality. The tool in question is a stylus that builds on the capabilities of the Apple Pencil by letting creatives draw and write in mid-air.

It might all sound a bit too futuristic to be true, but VR devices such as the Oculus Rift have already made huge steps forward in connecting motion and digital art, so it's about time Apple got in on the action.

The patent says that the new stylus would be capable of scribbling 2D notes in the air, and would enable users to draw three dimensional objects without the need for a surface.

Given that many digital artists currently prefer styluses that accurately simulate the bite of a pen or pencil as it draws across a screen, it will be interesting to see whether the Apple tool will replicate this sensation.

Outside of usability issues, we're also interested in which platforms the tool would be compatible with. Currently the Apple Pencil only works with the iPad Pro. Tying such a tool into Apple's ecosystem would fit the firm's marketing strategy – but fly in the face of any new-found drawing freedom.

As with all innovative patent ideas, we'll believe it when we see it on the shelves. However, seeing as Apple filed this patent claim over six months ago, there's a chance the company could be about to release it sooner than we think.