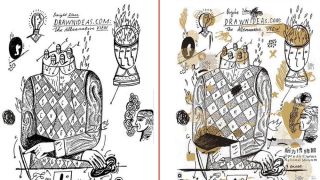 They say that imitation is the sincerest form of flattery, but when it comes to professional work, artists need to be careful that they aren't just stealing someone else's material. Plagiarism is tricky to define and expensive to challenge, and for Chinese art professor Fan Yu, it cost him both his job and an award.

The former art professor at Xi'an Academy of Fine Arts was found to have plagiarised the work of British illustrator Russell Cobb. Yu's artwork, which won the Red Dot: Best of the Best award for communication design back in October, has since been since been stripped of its prize-winning status.

Yu's four part poster series, titled Open Air Cinema National Museum, was originally designed for the Xi'an Concert Hall. Its drawings are said to “explore how the brain, the ‘strange cavity’, works and processes information with its countless cells and lobes”.

However the only information it appears to have processed are elements from Cobb's 2011 work, the ironically titled, New Ideas II.

The similarities were highlighted on Chinese social media platform WeChat. Account Chaoxiart, or "the art of plagiarism", posted side by side comparisons of the artworks to underline its point. Apart from some colour changes, most other assets have clearly been lifted.

Cobb, a teacher at the University of the Arts London and former chairman of the Association of Illustrators, told Chaoxiart that he had not met or heard of Yu until 21 April. This date was when Yu contacted Cobb in an effort to collaborate on a piece of art, a demand which intensified after Cobb discovered his work had been copied.

Xi'an Concert Hall said that it only knew about the poster series on 24 April, which was when Chaoxiart exposed the story. It added that it had not contacted Yu or commissioned his poster series.

Meanwhile, Red Dot has removed Yu from its website and said that anyone else who infringed on copyright via plagiarism would face a lifetime ban from taking part in the award.