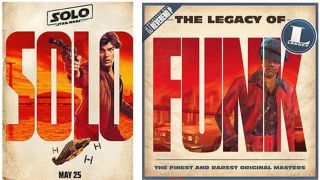 The upcoming Star Wars spin-off, Solo: A Star Wars story, has hit a new bump in the road before its release on 28 May. Solo, which already been dogged by behind the scenes upheaval and hastily drafted acting coaches, now finds itself in a poster design plagiarism row thanks to its recently released typographic teaser posters.

Unveiled back in February, the posters for Solo received a warm welcome thanks to their clever blend of typography and character graphics, not to mention the way they appeared to mix traditional and digital design elements.

However, it emerged over the weekend that the Solo posters bear more than a passing resemblance to a series of Sony Music France album covers by Hachim Bahous released in 2015. With comparable colours, typography and graphics, the similarities are certainly uncanny, to say the least.

Amazon graphic designer Adam Levermore shared the designs on Twitter to gauge the creative community's response. Judge for yourself whether the two designs are more than just a coincidence by exploring them below.

Um, @Disney, I loved the posters for #StarWars #Solo, but you have some explaining to do to the artist who created these album covers in 2015. pic.twitter.com/8WPOQuioTxMarch 3, 2018

Speaking on Facebook, Bahous said: "I am flattered that the quality of my work is recognised, but it is still pure and simple forgery, I have not been asked for my permission, I wish to be credited and paid for this work I have done for Sony!"

Indeed, a monumental coincidence would be noteworthy enough. But the story becomes even more problematic if you consider that Disney could have gone through Sony to secure repurposing rights without either studio being obligated to get permission from Bahous – a theory that many online creatives have leaped upon.

The whole incident has left artists and designers debating where paying homage ends and outright theft begins. And with no word forthcoming from Disney or BLT Communications, LLC, the creative team behind the posters, it remains to be seen if the dispute will be resolved.