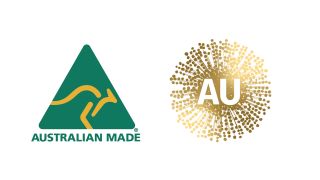 Some rebrands are successful, some less successful, and some are just plain baffling. Australian Made's new logo certainly appears to fall into the latter category, as it's replaced its beloved kangaroo with something that looks a lot more sinister.

The Australian Made mark is designed to signify products that are, you guessed it, Australian made. According to its website, the logo is "the mark of Aussie authenticity". But reports suggest the logo is about to change, and as one Australian MP has pointed out (below), the new version looks remarkably like a virus. Not quite where we'd look for logo design inspiration – especially in 2020.

I can’t believe they have changed the Australian made logo to look like this, it looks like a virus. I will be writing to the Australia’s Nation Brand Advisory Council & Trade Minister @Birmo to reinstate the Kangaroo! pic.twitter.com/KzfMebQ9wRJune 30, 2020

As you might expect, Twitter users have responded negatively to the new design, with more than one calling it an "epic fail". Many also decried the apparent removal of the beloved kangaroo, with one comparing it to "flushing out national identity down the toilet" and adopting the hashtag #BringBackSkippy.

Believe it or not, the new design isn't actually supposed to look like a virus. According to ABC, it's meant to represent the golden wattle, Australia's native flower that appears on the Commonwealth Coat of Arms. That makes more sense – although with the sheer amount of virus imagery doing the rounds this year, we can't believe Australian Made didn't make the connection.

MEDIA RELEASE: The Australian Made kangaroo is here to stay. The famous Australian Made logo is not being replaced. It will remain as Australia’s global product symbol, following reports of a new Nation Brand for Australia. Read more: https://t.co/Gpu0TWehuM pic.twitter.com/5inen21IX3July 1, 2020

Fortunately, it seems this isn't quite the blanket rebrand some are fearing. Australia Made took to Twitter (above) to announce that the kangaroo isn't completely disappearing. According to ABC, the new logo will only be adopted by businesses and government agencies.

Of the new logo for businesses, Federal trade minister Simon Birmingham told ABC, "Now, I don't hold myself out as some advertising or marketing guru — that's what we have experts for — but I think people will see that is a stylistic, modern representation of Australia." If said experts are looking for inspiration that's slightly less, er, biological, they could do well to check out our best logos of all time.