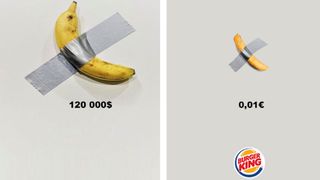 Would you buy a banana taped to a wall for $120,000? No? Nor would we, but that's how much one buyer paid for Italian artist Maurizio Cattelan's banana piece, titled 'Comedian' at Art Basel Miami.  And the artist even sold a second one for the same amount, and a third for $150,000.

The story went viral and Burger King decided to get in on the hype with its very own duct-taped banana parody, in the form of a print ad (see more print ads here). The fast-food chain teamed up with advertising agency Buzzman to create a tongue-in-cheek campaign that saw a Burger King French fry taped to a wall with the price tag of €0.01 (next to a very expensive banana taped to a wall).

The ad was shared in a tweet (see below) from Burger King France with the caption "N’avalez pas n’importe quoi." Google translates this as "Do not swallow anything". This seems like a dig at the art world, as if the chain is trying to tell us not swallow this BS. And we think they might be.

The saga doesn't end there, though – and it gets better. Heinz continued the conversation with a simple but witty response. The ketchup giants recreated the Burger King ad, complete with duct-taped French fry, but added a final flourish – a dollop of sauce on the end of the fry and a bottle of tomato ketchup in the foreground.

The price was upped from €0.01 to €0.02, and Heinz US' tweet bore the caption: 'Now, it's a French fry'. And Heinz Brasil's caption was equally as pithy, proclaiming: 'Upgrade Successful'.

Heinz stayed totally on-brand here, with an ad that could easily sit amongst its usual offerings – a simple image that puts the condiment firmly centre-stage as the star of the show.

And Burger King's pop at the art world is totally in line with its recent exploits, too. That Whopper bus outside of the Houses of Parliament had the same cheeky tone. Creating a topical ad from a subject everyone's talking about is a great way to generate loads of publicity without spending hours creating a standalone campaign. But it has to be witty for it to fly, and we think BK and Heinz have succeeded here.