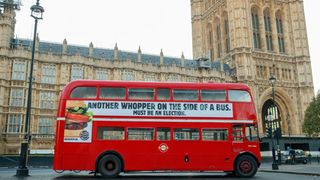 Everyone is going wild about this ballsy advertising stunt from Burger King, and with good reason. The fast food chain adorned a double decker bus with the politician-baiting slogan 'Another Whopper on the side of a bus. Must be an election'. Then, it parked the bus outside the House of Commons.

Whatever your political leanings, the stunt has certainly caught the public's attention. For that reason alone, it's probably up there with the best billboard advertising examples around.

Parking was a nightmare this morning pic.twitter.com/f0CABkHniKDecember 4, 2019

The campaign has been timed to tie in with the Dec 12 UK election, which for many is focused on Brexit.

For our US readers or anyone not in the know (where have you been, though?) the bus appears to be making fun of dishonest political promises by referencing the Brexit campaign, or more specifically the notorious £350 million pledge for the NHS that was driven around on a bus by the Vote Leave campaign. And the Whopper is a burger (of course).

“As the Home of the Whopper, we felt that if anyone has the right to stick whoppers on the side of a bus, it's us", said a spokesperson for Burger King. "So naturally, we've taken the opportunity to shine a light on our iconic Whopper in all its flame-grilled glory.”

BBH London conceived the campaign, and Frank PR handled the PR. "This is how advertising is meant to work," Ian Heartfield, chief creative officer of BBH commented, before highlighting how bold the messaging is.

"Stuart Royall and Phil Holbrook came up with a killer idea, a brave client didn’t hesitate to approve it, we got it made and out onto the streets in next to no time, the nation started talking about it. Job done."

Reactions on Twitter have been glorious, ranging from predictions for the upcoming election:

I'm expecting loads of people to vote for Burger King next weekDecember 4, 2019

To a comparison with the most revered advertising guru of all time:

This is outstanding Don Draper level advertising from Burger King.December 4, 2019

It's not the first time Burger King has jumped into a political situation with a cheeky stunt. Earlier in the year the company responded to milkshake-gate (i.e. one was thrown at Nigel Farage) by tweeting the following:

Burger King's cheeky online presence goes hand-in-hand with this tongue in cheek approach, and the company is clearly carving out a niche for itself in its brand messaging. In fact, Burger King's personality-filled Twitter must be up there with the best brands on social media, often responding to tweets individually and referencing pop culture events like Glastonbury.

But this stunt goes one step further, and it's certainly got people talking.