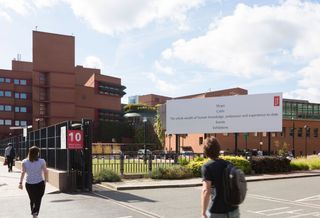 An advert for the British Library has caused upset on Twitter, and it's all to do with a comma, or lack of.

The billboard advert was created by Tom Sharp of The Poetry Of It All. We think it's an extremely clever piece of copyrighting and deserves to be up there with our favourite pieces of billboard advertising.

Although there was a lot of love for the campaign on social media, the middle section of the ad enraged some. It reads: "The whole wealth of human knowledge, endeavour and experience to date."

Some people think this sentence requires an Oxford comma, which is used to separate the penultimate item in a list of three or more things. So they think the ad should read: "The whole wealth of human knowledge, endeavour, and experience to date."

Those people are 100 per cent wrong in our eyes, but we'll highlight their opinions below, so you can agree with us.

The lack of the Oxford comma is killing me.September 10, 2019

Of all places, I would expect the British Library to employ an Oxford comma.September 11, 2019

Of course, if you are American – where the Oxford comma is more prevalent – you probably won't agree with us. You might even think that "endeavour" is misspelled.

Change that endeavor spelling and you got yourself a great ad ;-)September 10, 2019

The Daily Mail has reported this small number of tweets about the Oxford comma as "social media meltdown". And while we wouldn't like to say how many tweets constitute meltdown, we asked Sharp to comment on the Oxford comma situation.

"Over 30,000 likes on social media versus a handful of tweets about a bit of punctuation isn’t really a ‘meltdown’, but hey," he continues. "The majority of commentators on the Daily Mail article share my point of view. So that’s a first."

Sharp's work for the British Library also includes this rather lovely piece on how whatever you do in a library is research.

If it happens in the Library, it's research. What are you researching today? #WelcomeResearch pic.twitter.com/fLelYBHfa4August 29, 2019

If you've been affected by any of the issues raised in this post, we suggest you go straight to the British Library to do some research on the rules of English punctuation. The differences between American and British English might be a good place to start.