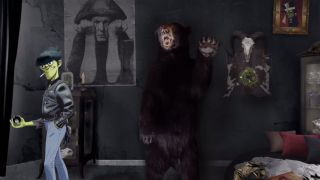 Gorillaz – the co-creation of Blur's Damon Albarn and cult comic artist Jamie Hewlett – has always operated just outside of normal reality. But you can get a bit closer to the animated band with this brand new app, just released today.

Launched ahead of the band's new album, Humanz, the Gorillaz App provides the first look at the latest manifestation of the band. There's also exclusive content including a first play of new album in the form of the Humanz House Party – a worldwide shared listening experience allowing fans to visit the Gorillaz' house and hear the new album together across 500 locations, from Tokyo to Santiago.

Developed by Gorillaz and B-Reel, the fully immersive mixed-reality app is a unique blend of real world, AR, VR and 360 environments, and enables fans to immerse themselves in the world of Gorillaz and join Murdoc, 2D, Russel and Noodle at home for the very first time.

Featuring a wealth of exclusive content at launch, with more to follow over the next few weeks, it's an amazing-looking app that perfectly captures Jamie Hewlett's distinctive style and becomes a full VR experience in conjunction with Google Cardboard. And if you don't have Cardboard you can still enjoy an immersive Gorillaz experience through the bespoke Augmented Reality menu, which is gateway to a whole host of exciting interactions with the band.

Davor Krvavac, executive creative director at B-Reel, explains: "Fans can now go through the looking glass, giving them a unique, voyeuristic viewpoint on their world. As last year’s Pokemon craze has taught us, people are increasingly excited and intrigued about experiences that mix reality and fiction – something that has always been part of the way the Gorillaz' story has been told."

The Gorillaz App is available now for iOS and Android; Humanz is out on 28 April.