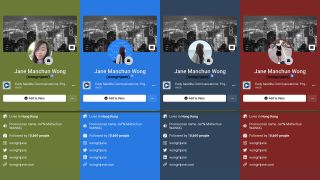 If you're of a certain generation, you'll no doubt remember the joys of customising your MySpace profile to make it look rad, mega, or whatever word we were using back in the early noughties. Well, now it looks like Facebook is about to join the customisable profile party – and only 20 years too late.

According to well-reputed hacker Jane Manchun Wong on Twitter (below), Facebook is working on an "adaptive colour background" feature for profile views. Wong's attached screenshot includes four colour examples, and we think it's fair to say that whoever at Facebook chose them is not a fan of, well, colour.

The offerings are: dull green, dull blue, dull darker blue, and dull burgundy – four hues that wouldn't have cut it in 2005, let alone today. Our guide to colour theory could maybe teach Facebook's designers a thing or two.

Facebook is working on adaptive color background for profile viewFound 10 days ago and still waiting for comments from Facebook pic.twitter.com/nRmBcE4vunApril 20, 2020

While there's no official word on the ugly colours above, if Wong found the feature, there's a good chance Facebook's testing it. And, unsurprisingly, we're not alone in our reaction to the four colours on display. In response to Wong's tweet, several users have suggested improvements, including using a gradient instead of solid colours, or adding brighter colours such as pink or purple. App designer Mike Rundle puts it most succinctly:

This isn't the only colour-based experiment on Facebook's part lately. Dark mode was recently rolled out, kind of – you need to be rocking the Facebook Lite app to use it (anyone?). Only time will tell whether we get customisable profile colours, but based on the examples above, we'll be sticking to what we've got, thanks.