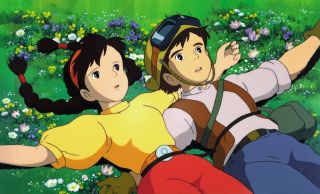 We’re big fans of Studio Ghibli’s weird and wonderful output, from the enchanting Spirited Away to the beautiful yet tragic Grave of the Fireflies. In a world of digital effects, its mostly hand-drawn aesthetics are a breath of fresh air, and offer an escape from the real world that's particularly welcome right now.

So we were super-excited to discover an exclusive four-part documentary on the studio's co-founder Hayao Miyazaki has just been made completely free to stream online. Originally released in 2019 by Japanese broadcaster NHK, 10 Years With Hayao Miyazaki chronicles the life and creative process of the legendary Japanese animator. (We can't all be Hayao Miyazaki, but we can certainly direct you to some great how to draw tutorials if you're eager to learn). Check out the trailer for the documentary below.

The documentary was over a decade in the making. Starting in 2008, Miyazaki allowed a single documentary filmmaker to shadow him at work as he devised what would become his blockbuster, Ponyo on the Cliff by the Sea. As well as exploring his creative process, the documentary sheds some light on Miyazaki's personal life. We see the filmmaker butting heads with his son, Goro as they work together on 2011's From Up on Poppy Hill.

The documentary is a fascinating insight into the mind and process of a filmmaking legend, and a must for Studio Ghibli fans – or anybody with an interest in animation. Stream it for free over on the NHK website.

Whether you're an old or new Ghibli fan, the studio's filmography is almost guaranteed to spirit you away with its kaleidoscopic visuals and fantastical plots. Thank goodness, then, the whole lot is now available to stream on Netflix. The films have been arriving on the platform over the last few months, with the final seven dropping on 1st April – which means there are over twenty now available for your viewing pleasure.