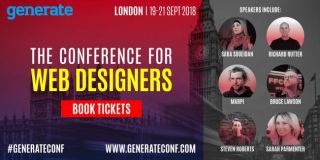 Generate London 2018 is now less than two months away and things are really ramping up. Not only are tickets getting snapped up but preparations behind the scenes are continuing in earnest. While we still have some exciting announcements to come, we couldn’t sit on this one any longer, so we’ve decided to share some of our latest speakers.

Hosted at the Royal Institution, the home of the Christmas Lectures, from the 19-21 September 2018, Generate London 2018 offers a day of workshops and a single-track, two-day conference featuring first-class web devs and designers.

On top of high-calibre keynote speakers such as Sarah Parmenter, Sara Soueidan, Bruce Lawson and Richard Rutter, we’re pleased to announce some more veritable web-design celebs have been added to the lineup:

Ricardo Cabello – commonly known by his Twitter moniker @mrdoob – is a self-taught computer graphics programmer best known for developing open source libraries and tools, such as three.js and frame.js.

With such extensive experience in JavaScript and 3D technologies, it’s no surprise Ricardo is training his sights on online VR. Aiming to give attendees a grounding in build-once-deploy-everywhere technologies like the WebVR and WebXR APIs, his talk WebVR with Three.js will explore how you can start building your first VR and AR experiences using Three.js.

Having earned computer science degree from Iowa State University and worked for leading tech brands like Microsoft, Cassidy Williams now works as head of developer voice programs at Amazon. She’s been recognised in LinkedIn's Top Professionals 35 & Under and Glamour Magazine's 35 Women Under 35 Changing the Tech Industry.

As Cassidy explores in her talk Creating Art with CSS, graphics in CSS exist at a nexus between designers’ and front-end developers’ skill sets. Exploring how to create art can improve your CSS skills, enhance your workflow and help you get a better a handle on how design is structured. In her talk, Cassidy will explore graphics from the point of view of a developer and how to build them in CSS, not only covering technique but also live-coding some CSS art.

With such stellar speakers already confirmed and yet more on the way, tickets are selling fast. So make sure you pick up a ticket for Generate London now.