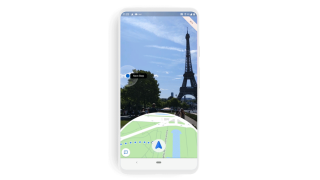 When you're visiting a new place, chances are you're going to rely on Google Maps to help find your destination. The popular tool from the search engine giant is one of the best iPhone apps for travellers and tourists thanks to its directional compass, but Google recently announced that it's set to get even easier to use thanks to a new augmented reality beta update called Live View.

With Live View, iOS and Android users will soon see Google Maps enhanced by their phone's camera overlay. This means that people will be able to hold up their phone and see navigational tips overlaid on top of their surroundings via the screen.

So, say you're looking for a nearby train station, all you'll have to do is fire up Live View and see big directional arrows on your phone screen pointing you in the right direction.

Live View isn't a new feature, but it is the first time that iOS and Android users will be able to enjoy it. Previously Live View has only run on Google's Pixel phones, which you can find great deals on here. Pixel users have been able to use the feature since March, but it's set to roll out to everyone else this week.

Get an idea of what Live View will look like in the GIF below.

"With a beta feature called Live View, you can use augmented reality (AR) to better see which way to walk. Arrows and directions are placed in the real world to guide your way," Google explains in a blog post.

"We’ve tested Live View with the Local Guides and Pixel community over the past few months, and are now expanding the beta to Android and iOS devices that support ARCore and ARKit."

Other updates to Google Maps include the Reservations tab and the timeline feature. All of which mean that soon we could be arranging every aspect of our trips through the app.