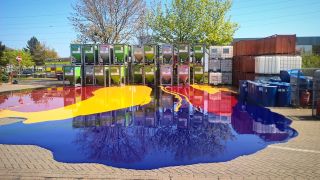 This vibrant puddle might look a surreal art installation, but you wouldn't want to go splashing around in it. That's because it's actually a hazardous 5,000 litre ink spillage. Just think of how many ink drawings you could create with that.

The image above was snapped by the team at Kent Fire and Rescue Service as they responded to a recent call to a print manufacturer in Dartford, Kent. And although the glossy pool of red, blue and yellow inks is mesmerising to look at, it posed a serious risk to local water supplies due to the harmful chemicals it contained.

Luckily, the rescue service was on hand to cover nearby drains with clay mats that prevented the inks from damaging the environment. The spectacle of the emergency didn't pass the team by though, as they referenced creative UK TV show Art Attack in a tweet about the incident.

This isn’t art attack... this is what crews were presented with when attending a spillage of ink in #Dartford. Firefighters worked to ensure ink didn’t go into drains and enter the watercourse. Protecting the environment is a key priority. pic.twitter.com/g7X5TU7jYZMay 3, 2019

As you can see from the photo, a substantial number of ink tanks appear to be spilling their contents. A statement from the rescue service claims that the tanks appear to have been tampered with, and that duty of care has been left with the site's owner.

People were quick to admire and share the image after it was posted on Twitter. It proved to be a bit of a Rorschach test of an accident, with some comparing the colours to the Red Bull logo, and others saying the puddle looked like a melted car. Another claimed that it could be "worth thousands as a piece of art".