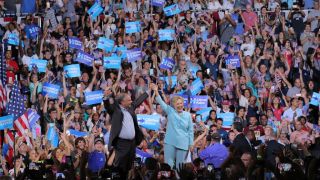 Remember last year when Hillary Clinton's logo design was revealed and everyone hated it? Those were great days, but a year later everyone's had a chance to get used to Michael Bierut's bold design and the consensus today is that it's actually pretty good, maybe even a design classic.

A year ago today, the Supreme Court upheld what we know is true: All love is equal.

The logo's been helped along the way by a number of remixes that reveal it to be a pretty versatile design system that can be used to represent all manner of issues, and with the appointment of running mate Tim Kaine it's most recently been adapted into a Clinton-Kaine logo with a new blue palette.

And with her nomination as the Democrat candidate now secure, Clinton's campaign has been pulling out all the design stops with a whole load of on-point signs and graphics unveiled at the 2016 Democratic National Convention, not only promoting Hillary Clinton but also laying into Republican candidate Donald Trump. Like the original logo, these were also the work of Pentagram, as Bierut revealed on Twitter.

Kudos to @jenniferkinon & the design team at @HillaryClinton HQ for perfect #DNCinPHL graphics all this week pic.twitter.com/8jQiYGRiMmJuly 28, 2016

The design love didn't stop at the DNC, either. Last week the Clinton campaign revealed its latest must-have promotional items: the 45 Pins Project, a set of badges by 45 top artists and designers invited to created designs that embody why they support Hillary Clinton, and including work by Michael Bierut and Paula Scher. Why 45? Because if elected, Hillary Clinton will be the 45th President of the USA.

WOW I got to design campaign buttons for @HillaryClinton with 44 very talented designers!!! https://t.co/hI9tLM11zy pic.twitter.com/GwmAKsxfHXJuly 28, 2016

I’m proud to show my support for @HillaryClinton with a design in The 45 Pin Project! https://t.co/EMORc9ZZdS pic.twitter.com/kq6UMd6aREJuly 28, 2016

The stunning collection of designer badges can be bought in individual sets for a few dollars each, or you can splash $100 on the whole lot in one go. Or at least you can if you're a US citizen; Federal Election Commission rules about campaign contributions mean that non-Americans aren't allowed to buy them.

As well as the designer badges there's more great looking Clinton gear available on the campaign store, such as T-shirts by leading fashion designers - including one by Marc Jacobs - plus sets of posters, bumper stickers, postcards and even shot glasses featuring many of Pentagram's eye-catching designs.

It's all a far cry from the resounding hatred of the original logo when it was announced last year; you can see plenty more over at the Hillary Clinton campaign site. And if you're not a US citizen but really want to own some of Hillary's designer swag, you'd better find an American friend to order it for you.