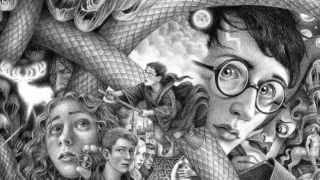 It's been 20 years since US readers took their first trip to the wizarding world of Harry Potter. To celebrate two decades of the fantasy phenomenon, Scholastic has unveiled a new set of black-and-white Harry Potter book covers illustrated by best-selling author and award-winning artist Brian Selznick.

Announced on Pottermore, the new covers feature scenes and characters from the book depicted in Selznick's signature monochrome style. Fans of the book will instantly spot details such as Harry's Patronus and the Dementors buried in the intricate artwork. Each book is accompanied by jewel-toned typography, topped off with the familiar jagged lightning bolt Harry Potter logo.

What makes these covers extra magical is that they make one long continuous image when placed side-by-side. Watch them in action in the video below.

"I'm a huge Harry Potter fan (a proud Hufflepuff!) and to be asked to illustrate the 20th anniversary edition covers was an absolute honour", Selznick told Pottermore.

"I knew this project came with so much responsibility to the stories, as well as to the readers. I revisited the books and was especially moved by the relationships between the characters in J.K. Rowling's magical world, so I wanted these covers to reflect that."

"One of the most challenging and rewarding aspects of the process was drawing seven independent covers that would stand on their own, while making sure that they also lined up to create one single satisfying image. It took dozens and dozens of sketches to get it right, and I am thrilled to share my great love for the books with these new illustrations."

So is it time to retire your dog-eared copies of the Harry Potter books? If yours are falling apart after so much reading, you only have to wait until 26 June to pick up the new paperback editions. Check out the full set of covers below (use the arrow icons to scroll through the set).