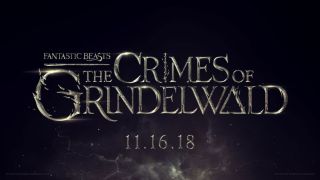 The Harry Potter franchise continues to rumble on with the upcoming release of the second film in the Fantastic Beasts series. To build up anticipation for the latest instalment, called Fantastic Beasts: The Crimes of Grindelwald, Pottermore revealed the film's logo and release date yesterday.

We've already seen this year how film logos can contain little hints and suggestions about what to expect from the story. Just look at the logo for Ready Player One, which snuck in a subtle maze and Easter egg image that ties into the events of the film.

Speaking of the Ready Player one logo, the Crimes of Grindelwald logo was designed by the same person – Pentagram's very own Emily Oberman.

The logo for The Crimes of Grindelwald doesn't contain anything quite as literal as a maze, but the torn up typography does suggest that the film is set to get a little more dark in tone. In fact, the film's synopsis reveals that we will see more of the Dark wizard Gellert Grindelwald, so it looks like the wizarding world itself is about to get ripped apart.

Following its reveal on social media, fans have gone into meltdown, trying to dig into the messages in the gritty typography design. Does the design of the letter "i" in "Crimes" relate to the powerful elder wand? And why is the letter "a" in "Grindelwald" shaped like a triangle? Could it be a reference to the Deathly Hallows symbol?

A short promotional video of the leading cast members accompanied the reveal of the title and logo. In this video, we see the Deathly Hallows symbol for a moment as it emerges from a smoky vortex. What could it all mean?

In one year, return to the Wizarding World with Fantastic Beasts: The Crimes of Grindelwald. #MagicInProgress #FantasticBeasts pic.twitter.com/8aWj8xhGj5November 16, 2017

Unfortunately the only way we'll find out is by watching the film, which will be released on 16 November 2018, so we've got a while to wait yet.