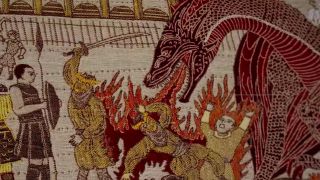 While the Bayeux Tapestry made headlines yesterday after it was announced that the huge embroidered cloth would be displayed in the UK for the first time, a different tapestry caught our attention. Created by Tourism Ireland, the Northern Ireland Game of Thrones Tapestry brings to life the complete story of the popular fantasy series in one 77 metre-long medieval wall-hanging like one massive, olde worlde infographic.

Any Game of Thrones fan worth their salt will know that the show has used Northern Ireland as a filming location over the last seven years, so it makes sense to celebrate a show that's become deeply embedded in the country's culture (and tourism industry). And with the final season now upon us, fans will also be pleased to know we have full details on how to watch Game of Thrones online.

We've seen some amazing Game of Thrones fan art before, but this tapestry takes it to a new level. Brought to life by a team of expert weavers working on a state-of-the-art Jacquard Loom, along with hand illustrators and digital artists, the tapestry is made of Northern Irish linen and other fabrics used for the costumes in the show. Watch how it was made below.

The original tapestry was created in under three months and went up to the end of series six. As series seven aired, a new section was added every week shortly after the latest episode was broadcast.

If you want to see the tapestry in real life you'll need to visit the Ulster Museum in Belfast. Alternatively, you can scroll through the whole thing on the tapestry's dedicated website. Along the way you can click on icons that explain corresponding plot points and learn more about the locations used in the programme.

The Northern Ireland Game of Thrones Tapestry is the perfect way to refresh your memory of the show and remind yourself of what's happened and who's died so far. Of course, if you haven't caught up with the latest series you'll need to be careful – the tapestry is full of spoilers.