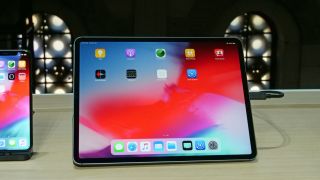 Today, after much speculation, Apple unveiled two new versions of its iPad Pro tablet. As the company geared up to announce the news, the rumour mill was rife as to exactly what we might expect from the new device. But now all has been revealed, and while Apple products are always going to cost you a pretty penny, the new features and design of the iPad Pro 2018 are already making it look like an attractive new option for creative pros.

Apple's angle for its new iPad Pro models exists in the name: these are tablets for those that want to take things to a more accomplished level, and that's reflected in the price tag.

While a lot was made about the power comparisons with traditional notebooks, it's in the portable, sketchable nature of the device that things really excel. The Apple Pencil, which sadly isn't included and will cost an incredible £119 / $129 extra, is much improved over previous models, with better latency and a smoother feel.

That results in sketching or writing on the glass surface feeling more akin to real life; while not perfect, the sensation of scribbling away is smoother and more responsive and thus makes your efforts feel that little more organic.

Speaking of the screen, the 11- or 12.9-inch displays are so much more impressive to look at, thanks to there being less bezel than years before - so you're getting either more screen (with the 11-inch version) or the same in a much more portable package with the 12.9-inch model.

The 264ppi resolution might not sound that great, but it's in the technology where Apple excels: the LCD display has been custom made to offer a wide colour gamut and impressive visuals whether you're watching a film, browsing the web or just idly fiddling with Photoshop (which will be fully supported on the new iPads when it launches next year).

Yes, you're paying a premium for these tablets, and you'll need to fork out more for the Pencil or keyboard (both of which feel fairly pivotal to getting the best out of them) - but for the overall effect and capability, this is a large jump forward for the iPad, and Apple seems to have made something the professional user should really think about using.

If we were to believe the rumours surrounding the cost of the new iPad Pro, we'd have been expecting to fork out somewhere in the region of $649/£619, which was already a hefty price tag. But, as we mentioned above, this is a serious piece of kit, which is fully reflected in the eye-watering starting price of $799/£769 - and that's for the smaller of the two on offer.

For the larger iPad Pro, you're moving into really serious money, with prices starting at $999/£969, and you can expect to pay even more if you're looking for bigger storage. Both available in four different storage sizes: 64GB, 256GB, 512GB and 1TB - we don't even want to think how much the latter will set you back. You can pre-order the iPad Pro 2018 in US, UK and UAE/Saudi Arabia from today, with Apple giving 7 November as the first day you can expect to see one arrive at your door.