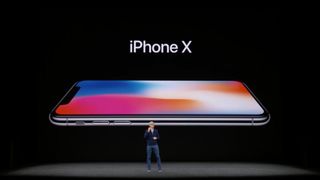 It’s that time of year again where Tim Cook et al take to the stage in California (this time in the new Steve Jobs Theatre at the Apple Campus 2) to tell us about the new iPhone. We’ve seen two new iPhones announced in recent times, but this year we’ve been treated to three – the iPhone 8, iPhone 8 Plus and, most interestingly, the iPhone X (or ‘ten’).

The iPhone 8 is available for pre-order on 15th September and costs £699 for the 64GB version. The 8 Plus is available the same date and will set you back a pound less than £800.

So let’s start with the iPhone X, then. Coming 10 years after the original iPhone, the iPhone X is the most radically different iPhone – in terms of design – ever. Gone is the Home button. There’s a very minimal bezel. And there’s a new edge-to-edge 5.8-inch ‘Super Retina Display’.

The front and back of the iPhone X are glass – the most durable glass ever, according to Apple – joined together by stainless steel. Spec-wise, the OLED screen looks pretty impressive, with 2,436 x 1,125 dpi resolution at 448 ppi. It’s HDR, and features Apple’s True Tone technology to adapt the screen to your surroundings for viewing comfort.

Screen aside, possibly the most interesting thing about the iPhone X is Face ID. The long and short of it is you can now unlock your iPhone with your face. It’s apparently pretty accurate, too – and the company has gone to great lengths to make sure it can’t be fooled by a photo of your good self. Oh, and you can also use it to create talking 3D animal emoji. If you like.

The iPhone X is powered by Apple’s A11 Bionic chip – which no doubt enables you to perform super-human feats with your smartphone. It’s splash, water and dust resistant and, even though it’s got a whopping 5.8-inch screen, comes in at a very svelte 5.65 inches (h) x 2.79 (w) x 0.3 (d) and weighs just 174g. Oh, and there’s also wireless charging, thanks to the iPhone adopting the Qi standard.

The iPhone X comes in space grey and silver in 64GB and 256GB configurations.

iPhone 8 and iPhone 8 Plus

The iPhone 8 and iPhone 8 Plus are much more familiar – with a similar form factor to their predecessors. The difference is there’s a new glass front and back design, with an ‘aerospace grade’ (who cares?) aluminium band. Like with the X, we recommend getting a case.

OK, let’s talk about the stuff you’re really interested in: how can the new iPhones up your Instagram game? Both the iPhone 8/8 Plus and iPhone X feature significantly upgraded cameras. And both feature some neat new portrait tools to make your shots better quality than ever.

Let’s talk about the iPhone X’s front camera first. This is the camera with facial recognition – and Apple is calling it, in true hyberbolic fashion, the TrueDepth Camera. This is the camera that scans your noggin to log you in. It’s also a 7MP snapper with a new Portrait Lighting feature (also found in the rear camera) enabling you to dynamically alter the lighting of your subject’s face as you shoot.

So whereas Portrait Mode creates a depth map and separates your subject from the background, Portrait Lighting analyses the lighting on your subject’s face and enables you to flick between presets – not filters – as you shoot.

Turn the smartphone over and you’ll see a vertical 12MP dual-camera setup – like the iPhone 7 and 8 there’s a Wide-angle and Telephoto lens for optical zoom within the Camera app. There’s dual optical image stabilisation here, as well. In terms of video, you can record 4K at 24, 30 or 60fps and 1080p footage at 30 or 60fps. And of course it supports the new Portrait features.

There’s also a new Slow Sync flash for better uniformity in low-light, more filters and Apple’s new image signal processor, which detects elements in a scene, such as people, motion and lighting, and promises to optimise your photos according to the subject matter.

The iPhone 8 doesn’t feature the new Portrait Lighting option – as it doesn’t have a dual camera setup. The 8 Plus does, on the rear camera only. Aside from this, camera specs in the 8 and 8 Plus are pretty much the same as the X as far as we can tell.

ARkit: what you need to know

During the unveiling of the iPhone 8/Plus and X we saw a demo of some pretty cool AR games. Developers will be able to take advantage of the faster A11 Bionic chip, the three-core GPU and enhanced camera to create some amazing augmented reality experiences.

It’s going to be fascinating to see what games devs do with the new power of the iPhone 8 and X – so watch this space.