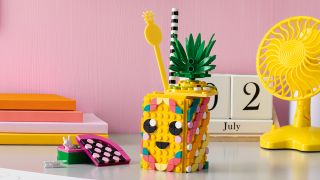 LEGO DOTS is a new 2D tile concept from the king of tiny bricks. LEGO announced the range in style today, by opening a massive, interactive HOUSE OF DOTS in London (read on for more on that). It's due to launch on 1 March 2020.

The core DOTS range encompasses colourful 2D shapes and tiles that children can use to create their own patterns and designs, with the aim of encouraging creative self-expression in children and teens. (Looking for something more grown-up? Head to our guide to the best Lego sets for adults).

The range extends to include bracelets, picture frames, pencil holders and more, all with integrated surfaces that their owners can customise with DOTS tiles. Finally, there are over 30 'mood tiles' to jazz things up. These seem to have been inspired by emojis, and include different facial expressions, and symbols such as stars, musical notes, planets and paw prints.

Is this the future of LEGO? While we love the idea of not having to follow instructions, we think much of LEGO's magic is in its 3D-ness. So we're not completely sold yet. We are, however, mightily impressed by the brand's launch promo.

LEGO announced its new range in serious style, by asking artist Camille Walala to create a massive HOUSE OF DOTS in London’s Kings Cross. The free public art installation includes five rooms that have been heavily customised with a vibrant mix of LEGO DOTS and Walala’s signature patterns.

Walala worked with 180 children and AFOLs (that's adult fans of LEGO, for those who don't know) to put together the huge, interactive installation. There's a living room, kitchen, bedroom, bathroom and even a DOTS DISCO room to explore, and guests can exit via – wait for it – an 8ft slide. Visitors are encouraged to get involved by creating their own DOTS patterns and bracelets, which they can take home with them.

The idea behind the DOTS range came from research that suggested children were looking for personalised forms of play that would enable them to express themselves more freely.

“We’re extremely excited to introduce LEGO DOTS as a new arts and crafts building concept giving children a creative canvas for social, self-expressive play with endless, ever-changing patterns, colours and designs," says LEGO's Lena Dixen. "As someone who epitomises how confidence in your creativity can have a tremendous impact, Camille was perfect to collaborate with to announce it to the world. She has created something extraordinary and immensely fun that we can’t wait for our fans to explore and be inspired by.”

HOUSE OF DOTS will be open from 28 January to 2 February (you can sign up to visit here). The DOTS range will be on sale from 1 March.