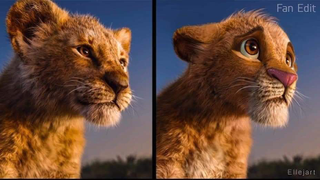 Disney's CGI remake of The Lion King undoubtedly showcased some of the best 3D movie work this year, but its creative decisions have annoyed online critics. Details in the logo infuriated type nerds, and on release the character designs also came under fire. Some viewers found that the photorealistic approach to  did a poor job of conveying emotion – especially when compared to the original.

A new fan art version reimagines Simba, Nala et al to illustrate these limitations and show how a less lifelike aesthetic could pack a stronger emotional punch. The animation was created by Jonty Pressinger, who used AI to bring digital artist Nikolay Mochkin's fan art to life. These creations made us wonder: is it always a case of 'the more realistic the better' when it comes to CGI?

Want to check out the original? Check out our Disney Plus guide.

Attention!!! All existing fees (gofundme.com and other) for the creation of the deepfake of the Lion King are not agreed with me. So do not risk spending your money for anything. I did not ask to raise money. So I warned. If this project is really implemented, then we ourselves will organize everything. . They Started to Move!!! . @jonty_pressinger X @ellejart . Thank you for the amazing animation 🙏 Hey guys, do you also want to watch this Fan-Made in the movie?🦁🎥 . . . #thelionking #simba #nala #timon #pumbaa #scar #lionking #animation #fanmade #fanart #collaboration #disneystudios Nikolay Mochkin

Considering that people were whining that the film's CGI characters didn't do the original animation justice, this new version should have gone down a storm, right? Wrong.

Some Twitter users, such as Dave Lee, didn't hold back with their criticism, saying the animation was: "[t]he single most awful thing I've seen on the internet this week. If you want 'cartoony' looking animals - go back to the cartoon. This completely destroys and disrespects the incredible VFX work of this film and the groundbreaking efforts in photorealistic animation."

Meanwhile other users were more even handed with their feedback:

I definitely really wish the faces were more expressive like in the original, but these would look ridiculous for live action.July 23, 2019

Is it possible to find approach that keeps the magic while showing off progressions in CGI? Recent efforts suggest not – the upcoming Sonic and Cats movies have both faced a strong backlash over their computer generated characters. Maybe it's time for filmmakers to re-evaluate how they're using the medium?