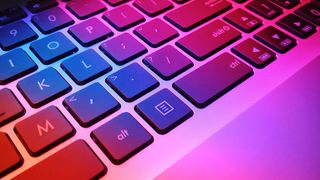 The predictions of renowned Apple analyst Ming-Chi Kuo are often bang on the money, and if his latest report is to be believed, the tech company's troublesome butterfly keyboard will be replaced by a traditional scissor-switch mechanism in future MacBook releases.

This will be a welcome update for Mac users who are currently infuriated by the laptop's butterfly keyboard setup. It's a flaw that holds back Apple's machines, even though they consistently make our list of the best laptops for graphic design.

For those unfamiliar with the difference, the mechanism for the butterfly keyboard is thinner than the traditional scissor mechanism found on other devices (and looks more like a pair of butterfly wings than an overlapping pair of scissor blades). But while it moves less, a butterfly keyboard is prone to jamming. It's also louder, which isn't something you want if you're working in a quiet studio.

After a non-Apple alternative? We've got you covered with our guide to the best keyboards for designers currently available right now. And if you don't mind about the keyboard and want an Apple product on the cheap, keep an eye on the upcoming Apple Black Friday deals.

The decision to alter the keyboards would be Apple's latest admission that the butterfly mechanism just doesn't cut it.  According to MacRumors, Apple has previously said: "We are aware that a small number of users are having issues with their third-generation butterfly keyboard and for that we are sorry. The vast majority of Mac notebook customers are having a positive experience with the new keyboard."

News of the change also comes courtesy of MacRumors, where Kuo says that among other updates including a time-of-flight camera, future Macs "will also swap over to a scissor mechanism rather than a butterfly mechanism".

The 16-inch MacBook Pro is expected to lead the way by adopting the scissor keyboard first. If you've got your fingers crossed that this will come to pass, you'll have to wait until the refreshed Apple MacBooks arrive in the second quarter of 2020. What's more, the rest of Apple's laptop lineup is due to follow suit throughout the year.