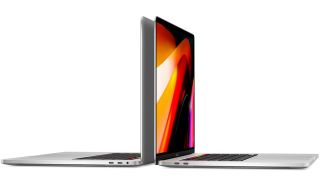 Apple has officially launched its new 16-inch MacBook Pro. This bigger, better laptop boast some features and specs that make it look like a particularly good choice for designers and other creative professionals. Impressively, Apple has packed an extra inch of screen into a body that's almost the same size and weight as the previous 15-inch model. There's also a new and improved keyboard mechanism, and some powerful specs on offer under the hood. Read on to find out more.

While this new machine is unlikely to be the target of the best Black Friday and Cyber Monday MacBook deals, it does make it more likely that you'll be able to bag a bargain on a 15" MacBook Pro (2019) as retailers shift stock.

MacBook Pros have long been the laptop of choice for designers. With the 16" MacBook Pro, there are some additions that seem to be aimed specifically at creative professionals. Will it be replacing the 15-inch MacBook Pro in our ranking of the best laptops for designers? At first look, it seems like it.

Before we move on to the inside of the machine, we should note the other big change. We reported previously that Apple was thinking of replacing its fault-prone butterfly keyboards, and it has done so in this new MacBook. The new scissor design is a welcome update, and will hopefully be more reliable.

To go alongside that bigger screen, you've got some improved specs that mean the machine should be able to maintain impressive performance whatever you throw at it. Under the hood, the new MacBook Pro 16-inch packs the latest 6- and 8-core, 9th-gen Intel processors, which Apple claims will deliver more than twice the performance of the 15-inch version.

This is the first MacBook to offer up to 64GB of RAM. Apple has also doubled the SSD storage space compared to previous models – there's a minimum 1TB, which can be bumped right up to a colossal 8TB if you need it (that's the largest SSD in any laptop right now).

The souped-up specs continue on the graphics side of things – there's a new AMD Radeon Pro 5000M graphics card, with GDDR6 video memory up to 8GB. Apple says with the standard laptop configuration, this will speed up graphics performance by more than twice compared to the previous MacBook.

Finally, there's the largest battery found in any MacBook – 100Wh – which Apple claims will last you up to to 11 hours of web browsing. Worried all this power is going to put your 16-inch MacBook Pro into a meltdown? Apple has improved the thermal design to ensure that doesn't happen.

Of course, this is the full, new release price from Apple. You never know, there might be a few Apple Black Friday deals  at the end of the month that make the price a little less painful. If you REALLY want one right now, you can order one on the Apple website. However, you'd be smarter to wait at least a few days for other retailers to start stocking them, and shaving off a few bucks here and there in a bid to undercut each other.