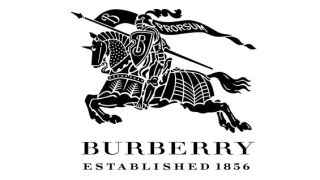 Just as fashions come and go, so too do logo designs. Even a design classic and wardrobe staple such as the Burberry logo (above) has to be consigned to the sale rail at some point. That's just what happened today as Burberry launched its new logo and monogram on Instagram.

The new logo (below) was designed in collaboration with Burberry and Peter Saville, and replaces the famous Burberry Equestrian Knight Logo which in one form or another has been going strong since 1901.

Before being put out to pasture, this chivalric design was last updated in 1999 when the brand dropped the letter 'S' from its name, switching from Burberrys to Burberry.

As you can see, the new logo goes for a straightforward text-based approach. The only design element to be carried over appears to be the black colour scheme, which in the original logo represented strength and durability.

Meanwhile, Italian designer Riccardo Tisci's new monogram takes the initials of the fashion brand's founder, Thomas Burberry, and weaves them into an interlocking and colourful design decked out in orange, white and beige. Accompanied by the hashtag #newera, Tisci is pinning his colours to the mast as he takes the company in a new creative direction.

In a series of Instagram post published simultaneously by Tisci and Burberry, we get a unique glimpse into the creative process behind the new logo and monogram. It appears that the fashion label imposed an incredibly tight turnaround time of just four weeks for a project that usually takes at least four months.

We wonder if these email transcripts have been airbrushed, "you must be crazy" sounds like a restrained way to respond to that deadline.

So are the new designs trend setters or fashion victims? As we've come to expect from a rebrand, public opinion on social media has been split, with many mourning the loss of the recognisable equestrian logo. (One user commented that they should BurBURY the new look.)

It is a shame to see the back of the knight and horse motif, however we're not so upset to wave goodbye to that old font. And if Burberry want to add a dash of contemporary style to their look, we'd say it's mission accomplished.

As the 'prorsum' standard on the old logo used to say: 'forwards'.