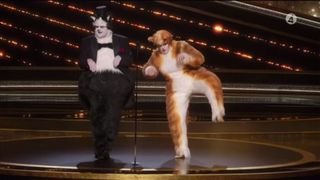 Nearly two months after its release, the much-maligned Cats movie is proving to be the gift that keeps on giving for lovers of high drama, if not for lovers of cinema.

The latest feline kerfuffle surrounds Sunday night's Oscars ceremony, in which James Corden and Rebel Wilson, both of whom featured in the film, dressed up in cat costumes and poked fun at the film while presenting the award for best visual effects, saying that as cast members, "nobody more than us understands the importance of good visual effects". Me-ow.

And while there's plenty that's wrong about the visual effects and character design in Cats – let's not forget that the studio had to issue a new version a few days after release that fixed a number of VFX issues, including Judi Dench's human hands – not everyone was laughing along with Corden and Wilson. See the skit here and see what you think.

Especially unamused was the Visual Effects Society, which took particular exception to Cats' VFX being singled out for ridicule, and released a statement to that effect.

"Last night, in presenting the Academy Award for Outstanding Visual Effects, the producers chose to make visual effects the punchline, and suggested that bad VFX were to blame for the poor performance of the movie CATS," it says, before getting in its own swipe: "The best visual effects in the world will not compensate for a story told badly." We're going to need a bigger saucer of milk.

It's easy to see where the Visual Effects Society is coming from. Pointing the finger at VFX artists isn't really on when the team would have been following the instructions of the film's production designer and art directors, not to mention the director himself, Tom Hooper. And while there were clearly mistakes made in the initial execution, the real problems with Cats' horrific uncanny valley looks are more to do with a flawed visual concept; the VFX artists were just following orders.

That said, the idea that Cats is a bad film because of "a story told badly" doesn't do it for us, either. Anyone who's seen Cats – either at the cinema or on stage – knows perfectly well that it barely has a story. It's about the spectacle and the songs; the story, such as it is, boils down to a bunch of cats introducing themselves before one of them gets arbitrarily chosen to go to cat heaven. No one cares. It's best summed up by this brilliant segment from an episode of Netflix's Unbreakable Kimmy Schmidt, which aired last year:

Cats has always been a load of old nonsense, and one thing you can definitely say about the film is that it succeeds in that regard. What it completely lacks, however, is the stage version's charm, and while the ill-advised CG effects play a big part in that, it's unfair to blame the Cats disaster on the VFX artists.

You can read the full statement from the Visual Effects Society here.