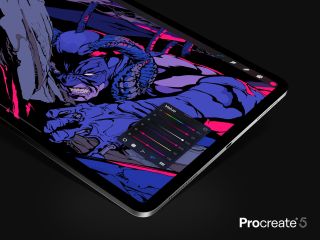 Procreate 5 has been revealed, and it looks very exciting indeed. The latest version of the painting and drawing app has a new super-speedy graphics engine, named Valkyrie and there are also big changes afoot when it comes to using brushes and colours in the app, plus some more useful tools.

For the first time, creatives can import their favourite brushes from Photoshop (see our favourite Photoshop brushes here) directly into Procreate. They can also combine brushes to make custom Dual Brushes, with over 150 brush settings. All these updated brush options are within Procreate 5's all-new Brush Studio, which is bigger – it can now be full-screen – and better – there's a new texture generator.

These changes mean that when you're using Procreate 5 with Apple Pencil, you can set pressure and tilt to get hundreds of different brush variables. Seeing as Procreate is already one of our favourite iPad Pro apps, these improved features could take the app to dizzy new heights.

Procreate is so popular, Adobe has even responded with its own painting app, Adobe Fresco, which is now available to preorder. But whether or not it can compete with Procreate's ever-updating app remains to be seen.

Elsewhere in Procreate 5, there's now a floating Color Picker, to make it easier to play around with hues within the app, and improved Color Dynamics for easier transformation of colours, and perhaps best of all, you can now import CMYK and RGB ICC profiles. There's also a new Clone Tool so you can easily duplicate textures across your work.

Animation is also set to become a lot easier with Animation Assist (above), which has features like onion skinning (which shows a faint outline of the previous layer) and instant playback. This builds on the introduction of animation in the app back in April, when the Text tool was also added.

Procreate 5 was unveiled on Friday at LightBox Expo, and those at the festival were able to preview the new features. Many took to Twitter to express their excitement:

spent a few seconds playing with the new procreate 5 features like the animation assistant, very glad for onion skins 🐸! pic.twitter.com/GLWlbC1P9rSeptember 8, 2019

Onion skinning in #procreate5 😱 I’ve literally dreamed of this day... never thought it would ever happen!!! pic.twitter.com/Ltv4WUc6bYSeptember 8, 2019

I got to try out Procreate 5 at LBX and let me tell you...these new features coming are a GAME CHANGER!! CMYK, new interface, making your own brushes from scratch?? Ugh I can’t WAIT!September 8, 2019

Procreate 5 is still in development, with a release expected later in the year. An upgrade to the new version will be free for those who already have the app. Watch this space for more news, or get Procreate now for $10.