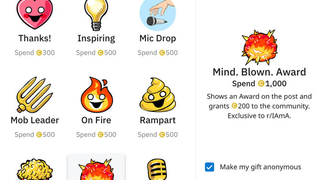 If you're familiar with Reddit, you'll know that if you leave a popular post in a community then you'll be blessed with a virtual award from a moderator. And as of today Reddit has started rolling out Community Awards for members to have fun with in selected Subreddits.

Community Awards, as their name suggests, are specially designed gifts relevant to each Subreddit. They're the result of months of user testing and will allow for a broader range of expression between users. Reddit ultimately hopes they will encourage healthier communication on the platform, especially seeing as they're created in collaboration between moderators and members.

There's also an added bonus for the site itself, because these awards are purchased using Reddit Coins (Reddit's in-app currency, which users buy with real cash).

So how do Community Awards work? Well, take the r/DunderMiffin Subreddit, which is dedicated to the US sitcom, The Office. A popular post could be treated to the 'Classic' Award, which looks like a stapler encased in jello. This is a reference to a practical joke in the show, which members of the community will recognise and appreciate.

Take a look at how the Community Awards look in the gallery below.

To bestow a Community Award on a worthy post, users click on the "give award" option, which appears under a comment. Receiving a Community Award has no practical upshot for the user, besides probably making them feel good. However 20 per cent of the funds used to buy the award go back into the Subreddit's coffers.

Community Awards are created by moderators, and they remain exclusive to that particular community. Moderators are encouraged to collaborate with community members on the look of the awards, which can be priced at anything between 500 and 40,000 Reddit Coins. To give you some context, the latter price is roughly $100.

"What we're most excited about with this feature set is the potential of elevating the conversation and making it healthier, and strengthening the relationships between users and mods," says product manager Vin Sathyamoorthy over at Mashable.

Or, to tell this whole story in a way Reddit users would understand - TL;DR: Community Awards could create healthier Subreddits and boost the site's bottom line.

Join us on 26 September for Generate CSS, a bespoke conference for web designers brought to you by Creative Bloq, net and Web Designer. Save £50 with an Early Bird Ticket when you book before 15 August 2019.