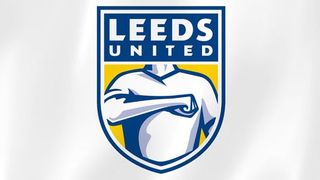 Leeds United has nearly hit its centenary, so to celebrate, the club decided it was time to redesign its badge (above). Despite referencing the 'Leeds Salute', however, the new crest has not been well received by fans.

Unveiled today, Leeds United's new crest took six months of work to complete and involved consultation with more than 10,000 people. For the uninitiated, the 'Leeds Salute' referenced in the new crest is a gesture used by fans on match days, where they place their right hand on heart and sing the club's song Marching on Together.

The redesigned badge is the latest in a series of efforts by the club to re-engage fans and the wider community. Leeds United isn't the first sports organisation to rely on a rebrand to boost interest, of course. Earlier this year, Formula 1 changed its logo to get more people involved.

Leeds United managing director, Angus Kinnear, said “updating the crest is not a decision we have taken lightly, but we are proud to have a new crest that is authentic to Leeds United and honours the quality and loyalty of our fans. It is a symbol of ‘strength in unity’ and a proud expression of the club’s identity and history.”

Currently, however, the only thing Leeds United fans are united by is their dislike of the new crest. Plenty have taken to social media to voice their despair, with some taking aim at how the emblem can be modified to represent other teams. (A popular one sees a Newcastle supporter punching a horse.)

Actually this new @LUFC Leeds United badge has potential for conflict resolution on and off the pitch... #altLeedsBadge pic.twitter.com/VDJTx5FdN6January 24, 2018

One element that's caused anger and confusion is the crest appears to be covering itself up. If a fan or player does the 'Leeds Salute', of course, by its very nature the gesture obscures the badge – but when it comes to design, blocking your team's badge is a peculiar way to show pride.

With a petition to stop the new badge from being implemented having already racked up over 10,000 signatures, it remains to be seen whether the club holds its ground or gives in to fan pressure.